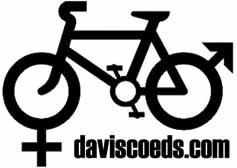 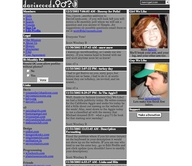 DavisCoeds had seen two major updates since inception. The site was originally written in ASP with a flat-file backend. The first major update was a re-write in PHP using a MySQL backend. The last update, which took place February 5th, 2006, featured layout changes (primarily to user profiles) as well as a re-written PHP backend. Daviscoeds is in the know about the Wiki, and allows you to perform a search based on a Daviswiki username!

Davis Coeds appears to have gone offline as of August 2007 after the domain name was swiped out from under ScottBiggart.

One could say that the purpose of DavisCoeds is just to put up some pictures and meet people. Most use it to meet people; a few use it to try and hook up with girls in the creepiest way possible; Scott uses it as a pool of Freshman girls to make out with — I think he's made out with... 90% of the girls on that site and god only knows how many guys. - ArlenAbraham

Another person could say, that if you aren't white you won't get any on that website. An Afro-American buddy and myself being Indian have gotten nothing from that worthless website. Most people on daviscoeds are worthless. It's cuz we are brown and black. Racists! - ZakirKhan

DavisCoeds is a meeting person website. Not a dating website. I do not believe that the site is racist. Scott Biggart is most certainly not. There is a diverse group of members on the site and if you go into the site thinking that you are going to "get some" then that may be the very reason why you are upset with the site. It has nothing to do will ethnicity and everything to do with personality. - RobRoy

You should learn to take a joke Rob. I still think it's racist. Unfortunately, some people will never see the humor in racism! Therefore I implore you to go see a play done by my friends the play is called N*gger W*tback Ch*nk. If you find that statement in itself offensive, then see the play before you judge it.http://www.dlartists.com/pdf/SP_032104_LATimes.pdf - ZakirKhan

2008-03-28 20:51:19   Its too bad too many people had to abuse the site or attempt to use it to get laid. It was a spiffy way of meeting new people. I've made quite a few friends cause of that website that I still talk to. Its a shame it had to go. And in reference to above comments, I'm Indian and had no issues meeting people. But then again, my primary use of the website was not to "get any" from someone I met online (thats a bit too creepy-craigslist-sounding to me). —SunjeetBaadkar