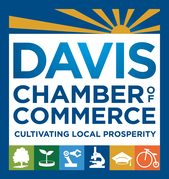 The Davis Chamber of Commerce is a membership organization whose mission is to "promote, support, and advocate the general economic vitality of its membership and the quality of life for the community." It was formed in 1905 by a small group of Davisville business owners to lobby the Legislature of the State of California to place the new University of California Farm School here, rather than several other competing locations. Their efforts were successful in 1907 and to this day the Davis Chamber of Commerce has a close relationship with both the City of Davis the University of California at Davis.

The Davis Chamber has a successful history of spinning off community organizations. The Davis Visitors Bureau, since expanded to become the Yolo County Visitors Bureau, was created by the Chamber to focus efforts that would welcome visitors to town. In 1989, the Davis Chamber led the effort to create the Davis Downtown Business Association in order to allow the Chamber to focus on a broader set of issues like economic development policies, business attraction and retention and redevelopment. The Davis Chamber of Commerce and the Yolo County Visitors Bureau are now separate organizations. Visitors are still welcomed into the chamber for city maps, referrals to local businesses, and general information.

Chamber membership is voluntary. The Chamber has over 500 members, including professionals, individuals, retailers, and non-profits. Some are in the downtown area, and others are located in the greater Davis area and beyond. The Chamber states that it is "a vibrant business organization which reflects the vitality, education, community involvement, and quality of life characteristics of our locale."

Core Purposes of the Chamber

The Chamber puts on an annual family friendly event Celebrate Davis on the 3rd Thursday in May at Community Park from 4:30 to 9:30 pm, with food and information booths from local businesses and non-profits, ending with a fireworks show. It also hosts Discover Davis, held early in the school year at the Wednesday Night Farmer's Market. Chamber of Commerce member businesses offer freebies, games, prizes, and information as a way to introduce themselves to students new to the city. The Chamber also hosts an annual black-tie Installation Dinner to celebrate their new Board of Directors and Chairman (which rotates yearly) in January. Additionally, the Chamber hosts a monthly luncheon and regular social mixers at member businesses that are all open to the public.

The Chamber is sometimes confused with the Davis Downtown Business Association (DBBA); the DDBA was created by the Chamber but it is now an entirely separate organization. DDBA membership is mandatory, with fees from property and business owners who are in the business improvement district (BID). According to Don Shor, of the 84 downtown retailers, only 13 were members of the Davis Chamber as of April 2012. The Chamber's current membership directory can be found online and does not seem to agree with Mr. Shor's assertion. For example, many Chamber members are located downtown and do not ONLY sell merchandise, like Helmus Optometry which offers eye exams but also sells non-prescription sunglasses. [See my 06/13/2012 reply below; pending any further information from the executive director of the Chamber, my statement stands — DonShor.]Furthermore, a majority of downtown businesses are NOT retailers, but include hotels, restaurants, financial advisors, insurance agents, real estate agents, mortgage brokers and many other professional service providers.

Under the direction of the Chief Executive Officer, the Chamber has begun to take a more active role in Davis politics (although it has also played a role in the past). It has revived a Political Action Committee, or PAC, called the Davis ChamberPAC (aka Business Issues Committee). The stated purpose of the Davis ChamberPAC is "to support (or oppose) local, county or state ballot measures and candidates which impact the business environment in Davis." The Davis ChamberPAC was created by vote of the Board of Directors in December 1997, edited in 2003 to increase the maximum monetary contribution from $500 to $1000 and edited in February 2012 to broaden the scope of efforts to include support of candidates.

The City of Davis has enacted campaign finance regulations that govern both candidates for office and committees formed to support/oppose candidates and/or measures. These regulations form a layer of more stringent regulations on top of the State of California's regulations as enforced by the Fair Political Practices Commission

There are no municipal spending limits on campaigns for local ballot measures in Davis.

In order to ensure that the community understands how the Davis ChamberPAC operates, during the June 2012 Election it was dedicated to transparency and went above and beyond reporting regulations and disclosed all of their donations and expenditures every week.

Accusations of illegality in reference to the "co-mingling" of candidate contributions and ballot-measure contributions into a single pool may or may not have a legal basis, depending on one's interpretation of municipal laws. There are no regulations, local or state, about how General Purpose Committees should manage their internal accounting. As previously mentioned, there are local regulations about how much money may be spent on City Council candidates. The Davis ChamberPAC continues to follow these regulations and has received assurances from the Davis City Attorney and City Clerk that the current method of accounting for donation and expenditures is legal.

Ironically, the ChamberPAC denies that the 2010 "Citizens United" Supreme Court decision played any part in their recent actions. According to Kemble Pope, former Davis Chamber CEO, "Let's be very clear that the Davis Chamber PAC's ability to raise and spend money in this manner has absolutely nothing to do with the Citizens United ruling." This statement seems strange, given that the controversial landmark decision is probably the most reasonable justification for arguing that the PAC can safely ignore the local ordinance (by claiming it has been trumped). However, given that the vast majority of Americans disagree with the Supreme Court's decision, and that it could significantly alter the traditional Davis political climate, it is probably a wise PR move for the PAC not to mention it. Furthermore, nearly half of the country's states are currently trying to argue that the SCOTUS decision might not apply to elections on the state and local level.

Measure D is the Parks Renewal Tax, which the PAC (as well as most of the community) believes benefits many local businesses and the general Davis community. The proposition is the extension of the original Measure D of 2002 that passed with a whopping 79% of the vote. To most people, this would imply that an extension would not require any advertisements in order to gain support, even during an economically tough time.

In the May 20th, 2012 edition of the Davis Enterprise, the ChamberPAC released its first print advertisement. Although it is primarily an ad for the populist Measure D, it also includes the names of the PAC's endorsed candidates for city council. The ad states that the endorsed candidates support Measure D, while ignoring the fact that the other candidates support it as well. In an official public disclosure, the PAC claimed candidate expenditures of only about $40 on the nearly $600 ad.

The ChamberPAC has endorsed Stephen Souza, Dan Wolk, and Lucas Frerichs for the 2012 City Council Election. The Vanguard has questioned these endorsements, given that "[i]t was Stephen Souza who, on the brink of the economic collapse, insisted that the city had a balanced budget and a 15% reserve, despite at that time what was $13 million in deferred maintenance" and that "[i]t was Stephen Souza who helped pushed through not only the budget in 2009 by a 3-2 vote, but the series of MOUs in 2009 and 2010 that did little to change the status quo. He was the swing vote on all of those and went against the side of fiscal sustainability." Souza also actively promoted Second Street Crossing (the site of Target) in 2006, which some believe has harmed Davis businesses such as the now out-of-business Alphabet Moon.

Some members of the community have asked the ChamberPAC to provide a more detailed description of the internal voting process and how it led to the endorsement of the selected candidates. Specifically, the public would like to know which candidates each Chamber PAC member voted for and how this led to a collective decision. Thus far, it is unclear if a unanimous consensus was achieved or if there was even a formal voting process at all. According to Kemble Pope, "There was hours of discussion, dissent and arguing. We came to consensus on Frerichs, Wolk & Souza for a variety of reasons that have been stated over and over again."

They used to host Chamber Day on the Quad, an event held early in the school year on the UC Davis campus in conjunction with the Student Activities Fair.

2005-05-18 15:18:24   It is interesting to note that the Government Relations Committee was the only community organization in the entire county that opposed Yolo County moving from PG&E over to SMUD. This was in opposition to every city and county government body in Yolo County that voted on this proposal. This now make sense with you see that a PG&E employee is on the Board of Directors and serves on the Government Relations Committee. Nevertheless, the Chamber of Commerce is a decent group of business leaders who do a lot for the community. — SharlaDaly

2009-08-07 18:09:35   DonShor, you are correct. Although we have regional members as well. For more information, please visit our website: www.davischamber.com. —ChristiSkibbins

2012-06-13 10:52:52   Regarding the recent edit by the Chamber executive director, here is a comparison of the members drawn from the membership directories of the DDBA and the Chamber respectively. Once they are cross-checked, an accurate number can be edited above and this comment can be removed. My tally shows 16 DDBA retailers who are in the Chamber, out of 84 DDBA retailers total. http://davismerchants.org/vanguard/DDBA%26Chamber.pdf —DonShor