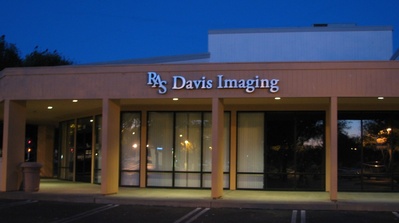 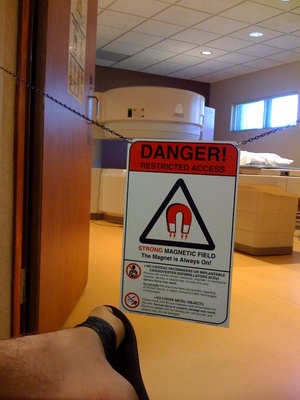 A quick picture of their open MRI device and the warning due to the large magnetic fields.

Trader Joe's wanted to build on the land that Davis Imaging occupied. However, RAS had a 14-year lease and had spent more than $1 million in building upgrades. Therefore, it was unwilling to move. Eventually, they did, however, in part because they lost their Sutter contracts when Sutter decided to do its imaging "in house." (See the TJ's page for further details on the history).

Demolition on the building began in April 2010.

2007-06-03 20:04:12   (Edited) This building used to be The Wherehouse. You could rent videos and buy cd's and videos here. Then it became a restaurant. I remember the display in front with cold bottles of beer sitting in a giant display of ice. The restaurant closed soon after it opened. —Jedron

It was a Rubio's, actually, but same premise. Was pretty happy when they opened, bummed when they closed, but have since learned to cope. —KevinChin