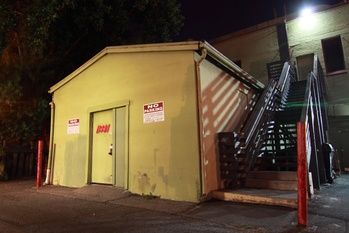 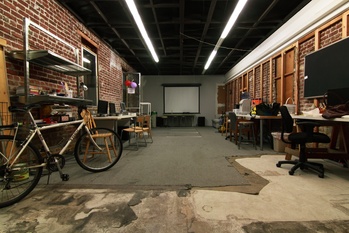 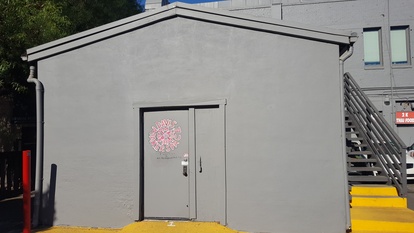 Davis Makerspace (DMS) is a local community workshop group with the aim of providing an open workshop for creative projects, skill sharing and the exchange of ideas. They currently run a shared workshop in downtown Davis, (informally known as Suite 1337). Current members include engineers, programmers, and artists (among other things). Davis Makerspace is currently funded through donations, and is officially a non-profit organization.

The current DMS workshop, a.k.a. Suite 1337, is located in the Tim Spencer Alley, behind Woodstock's Pizza. It is housed in a converted storage unit, and painted a dull green. It can be identified by the 1337 not painted in red on the door. Hackers know 1337 is very Leet. Inside, DMS members have installed a security system, upcycled dual-pane windows, refurbished lockers, worktables and more.

DMS started in 2012 under the temporary name Davis Community Workshop. Early meetings were held at Bike Forth, and later moved to the Omsoft facility on 5th street. Its development was more or less grassroots in nature with a loose consensus decision making process. They incorporated in winter of 2012 as part of the non-profit application process, and finally gained non-profit status in early 2014.

DMS scouted many workshop locations throughout 2012, including suites adjacent to Bike Forth and various locations on 2nd Street, Olive Drive, and downtown. In February of 2013, DMS signed a lease for a converted storage unit in Tim Spencer Alley. DMS spent most of spring 2013, cleaning up the facility, setting up Internet, building work benches, acquiring tools, installing security features, and generally turning the space into a functioning workshop. In June, 2013, DMS began holding an informal open house each Friday.

Can I use the workshop? Yes! Suite 1337 is available to everyone. Anyone can work on projects in the space or use the DMS shared tools. Open access is currently available on a limited schedule, (mostly weeknights at the moment, see the DMS wiki for a current schedule) Access during non-open hours are also available by appointment. While Suite 1337 is free to everyone, donations are encouraged to help keep the shop afloat.

What kind of cool stuff does Makerspace have? DMS is currently in the process now of building up the suite 1337 tool inventory. At the moment there is a mis-mash of tools, both hand and power. We have two Printerbot 3D printers up and running and 3 more printers currently being assembled. Other tools including drills, a circular saw, a couple reciprocating saws, soldering irons, glue guns, Xacto knives, paint supplies, and more. There are a couple linux machines for open use and wireless Internet access as well.

Can I get a key to the workshop? Funny you should ask. They are currently in the process of figuring out the best way to deal with key access. Feel free to get involved! Alternatively, don't worry about keys and just come on by during any of the open hours.

How can I donate to DMS? DMS accepts donations on thier website! http://www.davismakerspace.org/

Can I be involved in the DMS organization? Yes! The best way to get yourself involved with DMS is by attending their monthly meeting (first Monday of each month, usually at 7pm, at Suite 1337). You can also sign up for their group email list Google Group (or send an email to davis-community-workshop+subscribe at googlegroups tinyspeck com if you don’t want to use a google account).

Does DMS have an IRC? But of course… http://www.davismakerspace.org/irc. Many DMS members hang out there during the day. Drop by and say hi!

2016-03-24 18:49:15   Pretty positive that a few people who frequent the space used Arduinos and Raspberry Pis in their projects. —ToddKaiser

2016-03-25 12:24:50   Yes, there is good free wifi. I'd come to the monthly meeting to catch the most people with Pi/Arduino experience, its the first Monday of the month at 7pm. We are totally looking for more people in the community to get into and use the space. So have at it. —omrob