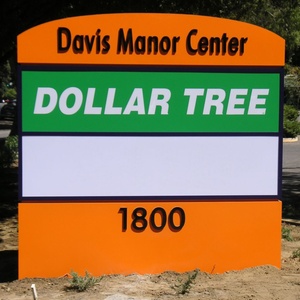 Davis Manor Center is the small bluish-gray-colored shopping center located on East 8th Street. The complex used to be a hideous bright orange color. The secluded location and lack of an anchor is a turn-off for prospective (and current) businesses, despite efforts to revitalize the plaza. It is commonly called just "Davis Manor," though technically the name refers to the entire neighborhood. Davis Manor Center opened in 1969.

There was large empty retail space where Ralphs Supermarket used to be until it closed down in April 2002. Ralphs (Kroger) holds the lease on the property until 2011 and is currently subleasing to Paul Petrovich, who had been unsuccessful in finding a new tenant for several years. The city zoning rules require a supermarket to occupy the lot but it was clearly not in Ralphs' best interest to sublease to a competitor. To make matters more interesting, the center consists of 4 parcels, all with different owners. Two of the parcels share a property line that runs through the supermarket building. The building has been rented out to temporary tenants, such as the Halloween Headquarters. In early 2006, the city decided to waive the supermarket requirement and part of the building was finally leased to Dollar Tree.

The two largest remaining tenants (R & R Thrift and Symposium) both own offsite property and are looking to move. The owner of Party and Vac would like to remain in its location and see the center revitalized. Proposals for the area include demolishing the center and created a mixed use residential area. There is contaminated ground under the center from a long gone gas station that would need to be cleaned up before housing could be built.12

The center was given its "unique" paint job in the summer of 2003. Some residents have called it "nausea-inducing" and desired it to be repainted to "something actually appealing." Furthermore, Petrovich has said that the color may have driven away a potential tenant to the Ralphs' lot. Others claim that the colors "add dimension and emphasize the building's forms."3 The yellow and green paint job for the Dollar Tree building has received criticism as well. The Dollar Tree originally wanted a beige theme but the neighborhood and city government chose a more "vibrant" palette. 4 Although, it was recently changed to a more earthly tone albeit with the Dollar Tree still retaining its bright colors.

Originally, the Ralphs was the original Albertsons supermarket in town. It was sold to Ralphs in 1999. For a short time in 1999, there were no Albertsons in Davis. In the Fall of 1999, Lucky was renamed to Albertsons. Albertsons had purchased the parent company of Lucky in 1998 and then suddenly decided to get rid of the Lucky name in favor of Albertsons in late 1999.

No idea, but I love it! Strip malls/complexes are inherently ugly, so it's just like fessing up, big time.

2005-06-24 08:36:29   I think the developers should consider turning this center into an international market! It would provide competition for Cost Plus [which I actually *do* love], and it would be a fantastic one-stop for all things international. Sari's, a larger Indian food market, entice Kim's over there, put in a Mexican market... it seems like a great op to me! Anybody got some seed money?? Friends in high places?? —AlphaDog

I'm sure you know about the International Market (middle-Eastern food) in this shopping center.

2005-12-23 15:57:24   If they painted it dignified colors (how about white or tan could be nice), it would not look reviling. And maybe someone would have moved in. But in the meantime, whosever idea it was to paint it that color has really ruined part of Davis. —JaimeRaba

2006-04-29 21:34:30   What they should do is put a Trader Joe's in there. Boom...revitalize the area, bring in a semi-specialty store that Davis has wanted in forever, and be able to support parking for a store like that, all in one fell swoop. Oh yeah, and paint that hideous thing. (When I was first training to be a driver for Unitrans, my trainer taught me the Chestnut turn on the L line by saying, "Now remember, butt-ugly building [gesturing right], turn left [gesturing left]." Haha —JulieEickhof

2017-01-04 11:40:39   No other comment for years and not clear about current plans, BUT there's a clearly a huge need for a discount food place like Grocery Outlet, mentioned elsewhere in this Wiki. What's also needed is affordable housing with no parking minimum on every single large parking lot in Davis, in this instance supported by a guarantee that a tenant like GO can stay without raising prices, robust alternatives for driving-to-shop, some kind of aesthetic barrier such as a small square between the housing and stores, green roofs on all buildings (partly also for aesthetic reasons) and limited paid parking under the building or on site. It's an okay idea to build a mixed-use development with affordable housing here if new shops take over the specific function of the existing ones. Seems like a retro-fit will be more likely to keep the stores in place. Eliminating stores from this site can also increase transport distances for shopping. The "anchor" does not have to be a higher-end local or national chain store; it can be a square with a fountain, ice cream place and other shops and eateries that attract people of all income groups. With stores and e.g. DaVinci steps away this re-done place will be extremely attractive for home-seekers, even if not everyone is guaranteed a place to park. —DeepStreetsDavis