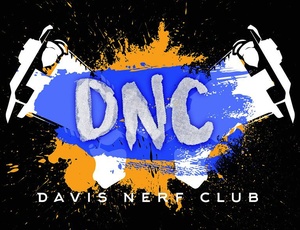 What is Davis Nerf Club?

Davis Nerf Club (DNC for short) is a UC Davis club that holds free-to-play NERF games every weekend in the Death Star.
The club was formerly known as the Davis Urban Gaming Group, or DUGG. 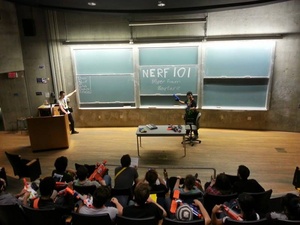 DNC meets every Saturday night starting at 6PM in the Social Science and Humanities building and usually stays there until 9PM . During this time, the club plays a variety of Nerf-based games/gamemodes, from Team Deathmatch to objective-based games, and even from small-scale Humans vs Zombies matches to deception-based social games. To participate, you must be a UC Davis student or age 18+ and must sign a safety waiver each quarter. Games are run by a team of moderators who are there to make sure our games run smoothly and ensure the best playing environment for everyone involved. Their names are listed above. 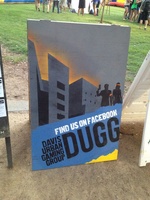 The club's former A-frame on the quad

While people are welcome to bring your own blasters and ammo, it's not a requirement. The club provides the necessary equipment for all members, a service made possible by donations to the club and various members who lend out their extra blasters. DNC has a large collection of darts and blasters, so finding a blaster for everyone is never a problem. Any modded blasters will have to be evaluated by the moderator team before they can be used, but DNC encourages people to bring their creations and try them out.

In addition to the normal Saturday Night Nerf games, DNC sometimes run other events, such as Quad Games (DNC used to do events like capture the flag, paintball excursions, a weeklong game of Assassins, and laser tag).  The club also provides a service where it lends its moderators and equipment to another organization and hosts their socials for a price. As for events, these are usually announced now on the DNC's Instagram Page, and the DNC's Discord Server (used to be theFacebook group and the club's Facebook page) which are the best ways to stay updated.  The club, as of now, also currently hosts 3 day HvZ's alongside the usual Saturday game, and used to always have a strong showing at the quarterly week-long Humans vs. Zombies games, ran by its old unactive sister club HvZ.

For more information, contact one of our moderators, and or message DNC via any social media.

Every game/gamemode has its own rules.  The moderators will explain the rules of each game before it starts, so be sure to listen.  They are also always happy to help out if there are any specific questions.

A few examples of the games played at the club are:

Team Deathmatch - A firefight between two teams. There is also a three-team version.

Humans versus Zombies - A game of infection tag where those who are not 'it' have NERF blasters. When a human is tagged, they become a zombie.

Alamo - Defend the point for a specific amount of time against an increasing number of attackers.  When a defender is shot, they become an attacker.

Payload - A "payload," usually one of the moderators, will walk on a path between one team's spawn and the other's. Teams have to defend the payload and make it walk towards the other team by touching it. Whichever team gets the payload farthest away from their spawn by the end wins.

Infection - A mafia-style Nerf game with humans and zombies.

Gladiator - Teams of 3 take turns fighting it out in a pit.  The winning team stays and fights new teams until it drops.

DNC has all sorts of game types besides these that they mix up in order to keep things fresh.  If you have any ideas for a game type, let a moderator know. The club loves to get feedback and hear suggestions from the community.

Humans vs. Zombies (Not Active)