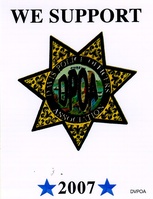 One of their free decals

The Davis Police Officers' Association (DOPA) is a charitable and fraternal organization run by the officers of your friendly local police department. They support local youth programs as well as anti-crime and victim assistance programs. Presumably, they also exist to help out officers and their families during times of need. They also issue endorsements for some local political races/measures.

During the 2006 Spring Election they mailed out a postcard with their endorsements. In the 2006 City Council Election they endorsed Ruth Asmundson and Mike Levy. For the office of Yolo County District Attorney they backed Jeff Reisig.

Donating to the Davis Police Officers' Association will get you:

Gifts are not considered tax-deductible. Sorry, you won't get special treatment from the police, even if you donate like Robert Mondavi.