The Davis Schools Foundation is a 501(c)(3) non-profit organization with no paid employees. The Davis Schools Foundation's mission is "to support educational excellence in Davis public schools by raising funds from the community for district-wide programs and promoting equitable opportunities between schools." They have supported Grad Night and run charity golf tournaments.

In the spring of 2008 as the Davis Joint Unified School District was suffering the dual impacts of state funding cuts and internal financial mismanagement the Davis Schools Foundation began a program of asking Davisites to contribute $1 per day ($365/yr) to support programs that would otherwise be cut. They initiated Dollar-a-Day Campaigns in 2009 and 2010 as well in the face of continued budget cuts.

The Davis school district faces a $5.6 million budget gap for 2010-2011. In order to close that gap, the district plans to layoff 11.9 percent of the DJUSD staff, or the equivalent of 88 full-time jobs. Remaining staff will educate the same number of children – about 8,500. This will mean bigger classes, fewer course offerings, reduced secondary counseling, and a slashing of campus safety and support services. Instructions for donating can be found on the website linked above (you can make a donation online or send a check). And, of course, you can donate any amount — it doesn't have to be $365. However, the DSF requests that donations be made by May 1, 2010, in time to rescind the "pink slip" layoff notices that have been issued. 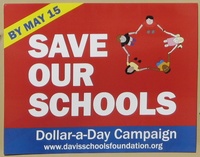 2008-05-19 00:12:27   Internal financial mismanagement is probably subjective and a tough thing to pin down. Would you care to elaborate or support that comment? A more plausible explanation is that the DJUSD planned for growth in Davis that did not happen. That accounts for the decline in enrollment for the district (contributed about $1 million to the deficit), and some of the "one-time expenditures" and the eventual closing of Valley Oak. —HiramJackson