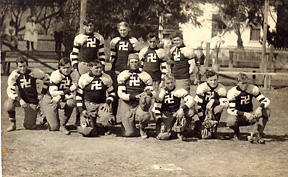 The Davis Swastikas was a football team in existence in town up until 1909. The swastika usage predates the Nazis' bastardization of the symbol; prior to the anti-Semitic and otherwise aggresively prejudiced usage, it had been considered a good luck symbol in cultures ranging from Hinduism to Buddhism to Native American. The Davis Swastikas were not the only sports team to benignly use the swastika. The Canadian women's hockey team, the Fernie Swastikas, was formed in 1922 and made use of the now-infamous sign. For modern usage of the swastika as an expression of hate in Davis, look for Incidents of Racism in the Race & Ethnicity entry.

The Davis team disbanded immediately after the death player Winford K. Ludden, who sustained injuries during their game on Sunday, October 10, 1909. Ludden had sustained two cracked ribs from an incident with a mule two days prior to the game, and those injuries he sustained in play-time sealed his fate. In play, Ludden had made a run for his opponent for a tackle, striking him very low with his head. At the moment of striking, another man closed in on the party and struck from the opposite side, bringing Ludden to a sudden stop. His neck was broken on impact.