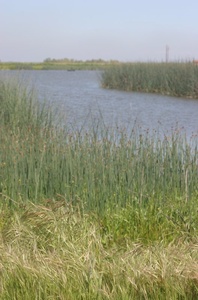 The Davis Wetlands are located at 45400 County Road 28H, east of the City of Davis Waste Water Treatment Plant. Call (530) 757-5686 for information on tours and programs. Or, you may also contact the Yolo Basin Foundation for information and tours at (530) 757-3780. The wetlands has an auto tour route and wildlife viewing areas. The best time of year to visit is fall and winter. The Wetlands are well known for harboring migratory shorebirds in fall and hosting a large wintering population of waterfowl (in addition to the Yolo Bypass Wildlife Area) along with many species of gulls. Steve Hampton's website lists a few bird highlights of the wetlands. Be forewarned that between Sept. 1 and Feb 15, the Wetlands are only open Mondays from 7 a.m. to 1 p.m. Otherwise, they are open all week from 7 a.m. to 1 p.m. The hour restrictions have to do with hunters having access to the ranch that abutts the wetland's western edge. In order to protect wetland visitors during the hunting season, hours are restricted. The gate is usually closed even during designated 'open' hours, but not locked.

Friendly docent Lisa helps identify a mystery bird Docent-led tours are available year-round on the first Saturday of each month. Between March and August, tours leave from the Waste Pollution Control Plant at 9 a.m. From September through February, tours leave at 3 p.m. from the same place. Tours last for two hours. Docents are well trained and it's common for more than one docent to be on a tour. This both helps with large tour groups and because docent's knowledge areas tend to be deep, but specialized.

The Davis Wetlands play host to a number of native species. Habitat is specially set aside for flora like the Elderberry Bush and native grasses. Wildflowers are not common in the wetland area, but can occasionally be found along the shores of the various ponds that make up the ecosystem.

Natural gas pumping station Unfortunately, the wetlands are not entirely dedicated to waste filtration and habitat preservation. When the city acquired the land, mineral rights were sold to a company called "KTY" which is currently extracting natural gas from the ground. While the main pumping station, located along the eastern edge of the wetlands, is quite noisy and something of an eyesore, it's a small price to pay for the beauty of the remaining 400 acres. Black tanks are visible around the wetlands — these hold water that has condensated out of the natural gas upon extraction.

The number of animal species in the wetlands is quite incredible. On the April 2, 2005 tour, 46 distinct species of birds were either seen or heard by the docents. In addition, jack rabbits, rats, beaver, skunk and coyote have all been seen in the area of the wetlands. Dedicated bird counters from the local Audubon Society regularly conduct censuses of the birds in the wetlands — and regularly come up with some of the highest counts for anywhere in Yolo County.

A common bird to see in the wetlands: the red-wing blackbird 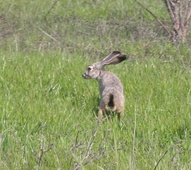 Blue egret in flight over the levy

Lupine are a rare find in the wetlands

Native grasses flourish in the wetlands

A bird of prey hunting in the wetlands

2005-08-25 22:45:37   The wetlands is an awesome place. So's the wastewater treatment plant the wetlands are attached to. Got to take a tour of both last year when I was researching/writing my final paper for Rob Thayer's bioregionalism class...I got splashed with Davis sewage! I felt disgusted, yet honored. —MarisolCortez