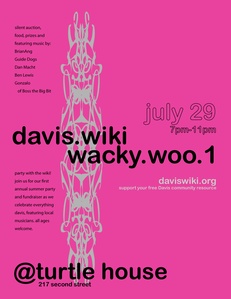 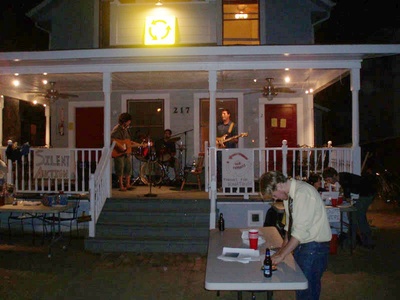 The Davis Wiki Wacky Woo 1 was the Davis Wiki's first fundraiser. It was held on July 28-30, 2006, with the main event being the show and auction held at the Turtle House on July 29th. Musical entertainment and lots of food were provided, and good times were had. Not only that, but the Wiki raised approximately $2500, still $1000 short of the goal, but still greatly appreciated.

AllisonEriksen, the fundraising coordinator for the first DWikiWackyWoo, used the fundraiser as a her Service Learning Project for her Anthropology course. She collected data by using two surveys, one for people on the Wiki, and another for random people she got to take it. Here are her conclusions:

Wiki User Survey: 47 anonymous Wiki Users participated in the online survey. Frequency of Use: Daily - 66%, Weekly - 29.8%, Monthly - 4.3% Most Used Segments: Restaurants/Bars, Entertainment, Davis Politics, Events Board, Services Editing: 75% submit information, 25% did not. Donation: 90% of users would be willing to donate. Of those, 10% would donate less than $5, 15% would donate $6-$10 and $11-$15, and 50% would donate more than $15. These numbers did not show significant change if the Davis Wiki received non-profit status.

Random Person Survey: 6 random people that AllisonEriksen found in the CoHo took this survey. She did not note age or gender of participants. 1/3 participants claimed some knowlege of the Davis Wiki. Of those who did not, after reading a short "What is the Davis Wiki" paper provided, all claimed that they would use the Wiki. No one surveyed was interested in donating to the Davis Wiki. Half of those surveyed would be interested in attending a Wiki fundraising event. As a prefered fundraising event, 100% picked "concert", 67% picked "sporting event", and 67% picked "Picnic in the Park style event". Most said all 3. No one was willing to pay more than $10 to attend said event, and 50% said that they would pay none at all (most likely those who weren't interested in attending).