This page is a list of things Davis either sorely lacks or that certain wiki users are demanding be supplied. Something like Target is debatable whether or not most people in Davis wish for it or not; then again, the debate occurred and the Target arrived. But as for this list, wiki users can hope that businesses and/or the City Council will take note of our suggestions. Also see I Love Davis, I Hate Davis, and Plethora vs. Dearth in Davis. 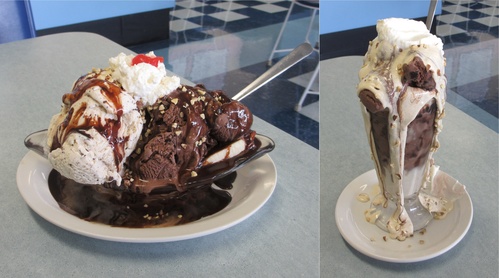 Davis has great homemade ice cream at the Davis Creamery, but why doesn't it have a sit-down restaurant where you can get a big drippy sundae like these from Leatherby's?

It would be awesome to get modern download speeds for less than $70/month. Fingers crossed for DavisGig.

We used to have one in Central Park, what happened? Meanwhile, Woodland installs an awesome water park for kids in Slaven Park. We need a free, safe place to cool off in the summer!

You know what we need to do in this town? Something along the lines of http://www.cowparade.com. Because if any town can do weird public art, involving cows, it's us.

As the Payphone Project has shown, there are protected posts all around Davis. Re-purposing them to a community shared library would be awesome. In April 2012, the East Davis Library in a Box started showing it can be done.

If you need to rent a place to practice with your band, where can you go? I'd rent one if there was one available locally, and I know other musicians who would do the same.

Hooka Bars can't be established in Davis because of a city ordinance that prohibits smoking within and around 100 feet of any establishment. - RobertBaron

- What about the CommuniCare Health Center? -gurglemeow

Instead of throwing landscaping junk in the middle of the bike lanes so that it can blow around the streets, the city should supply landscaping bins. It would be more aesthetically pleasing, and less hazardous for bikes. Keep the bins in your yard until garbage day. It's not exactly a novel concept, since many towns have already adopted this practice. Why Davis hasn't, I'm not exactly sure.

- You can order Buffalo Wild Wings sauces online at their website. I grew up eating their wings in the east and brought some Parmesan Garlic sauce with me when I moved here from Florida. :) inu

*The way they're expanding, it's possible. But I hate having to go to Vacaville or Natomas to get a burger from here. Almost as good as In-N-Out, but very different. - —sba

A bar with decent cocktails

We need an authentic panaderia. I have to go all the way to woodland or west sac to satisfy my cravings. aren't there enough davis residents with a taste for Hispanic breads and pastries to support a locally owned panaderia?

Computer accessories, video games, a huge DVD selection, CD's, and game consoles for you to play. 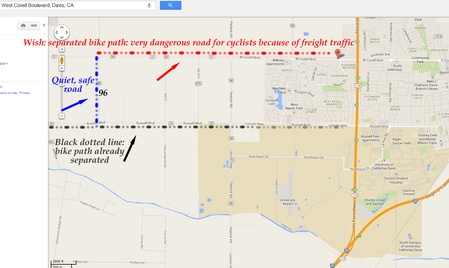 The skatepark which is in the center of the Community park is hideous. It is excessively small and not very fun. The people who designed it seem to have no knowledge of how to work with concrete and/or design a skatepark. This is clearly evident to anyone who's ever gone there. There are lumps on what should be smooth surfaces, the transitions are either too tight , or in the case of the "bowl", so shallow that there is no way to pump to get back up to the lip on the other side. I implore the city to make a park that is not only safe, but fun!!

With the Bicycling Hall of Fame, UCD's championship squad and the sheer number of fixed gears riding through town, it seems only obvious that Davis get a Velodrome. It doesn't need to be anything fancy, but on the lines of Hellyer Park in San Jose. I'm all for it.

* Bathory states a lot of win. I think this is a horrible idea of banning driving downtown. What about the handicapped? Are they no not to see movies? Sing some karaoke at Woodstock?

Davis has grown a lot in size and population since I got here in 1979. This has created pressures on the quaint residential properties in the core area, it has increased traffic into the downtown area, parking is getting harder and harder to find, and from what I have heard from several shop owners, the downtown property landlords are ruthless. In addition, the idea of closing selected downtown streets has come and gone several times, and was even tried once, on a limited basis (one-way streets, if I recall correctly). And, admit it Davis, the ratio of bike to car traffic in downtown is no where as high as it once was. Finally, the pressure to build big mall-like facilities (barren retail depots that offer nothing in the way of community and culture) has been a big issue lately.

My solution is to set aside an area where a second downtown could develop and establishing guidelines for making it happen. A Downtown II has many possibilities, most I see as good. Here are the pros and cons, listed together, and in no particular order. You can decide which are pros and which are cons and of course since this is a wiki you can add more items and can add observations to the already listed items.

Where should the Bums go?

Why doesn't davis have a shelter for the homeless? I know that local churches help out every once in a while, but why isn't there a mission house where street people can get counseling and guidance to get back on their feet? some may say that there aren't bums in davis, but i see them all the time loitering around the various grocery complexes and occasionally downtown. A shelter can be an asset to the community and an opportunity for others to contribute to their fellow comrades' wellbeing.

Move wishes that have been fulfilled into this section.

A Trader Joe's arrived in 2010, fulfilling the wishes below.

How about College Bowl?

The new Segundo Dining Commons has all kinds of food to please all manner of tastes. The salad bar has what I missed from Fresh Choice, at a comparable price too.

There must be enough independent, self-employed, work-from-home, creative people in town to support a coworking space.... anyone interested in pursuing this with me?

Check out http://daviscoworking.blogspot.com (opening in early March at 213 E St., above Luigi's Pizza)

Coworking is great! If you work from home, are self-employed, spend hours on end in cafes working, or don't like the work environment at your real office and have the flexibility to be elsewhere, try it!