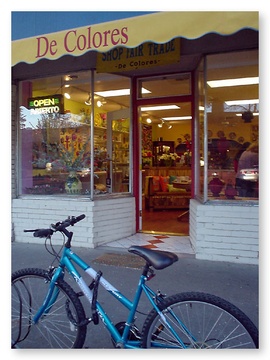 De Colores Fair Trade Gifts is a privately owned business. It was begun as an arm of a nonprofit and became a worker cooperative in 1997 — it was taken private sometime after 2002, when it was re-named "De Colores Trading Company."

For fair trade Coffee in Davis check out http://daviswiki.org/Pachamama_Coffee_Cooperative

2008-07-15 21:44:32   De Colores' support for indigenous organizations is still a feature of the store, but they DO appear to have some financial constraints and MAY not be a sustainable business in the long run. OTOH, all small businesses have some issues. —DougWalter

2008-07-20 14:08:39   More changes are afoot at De Colores, as shoppers might have guessed from the sales (e.g. 30 percent off jewelry, which must have reduced the inventory!). I was told that they will likely shut the doors until sometime in the fall, but reopen for Day of the Dead and the holiday shopping season. Wikizens, let's keep this updated when solid information is available. —DougWalter