This business moved and changed its name to Illusions. 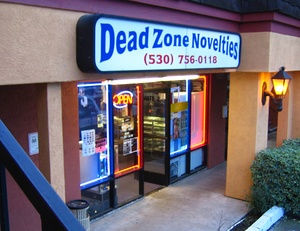 D-Zone Novelties is a head shop — the only one in Davis. They sell a variety of goods including blacklight posters, incense, clothing, body jewelry, tobacco accessories, hookahs (with tobacco and coals) and water pipes. They were originally called Dead Zone Novelties until some time in 2006.

Please have your ID ready, the guy at the counter cards you if you appear younger than 18 years of age.

Originally, the owner intended to sell sex toys and "ya know, DVDs", but the Davis Business Association and the City of Davis would not allow it.

2005-06-09 15:10:13   Could someone post the law here, that says sex toys cannot be sold? Since when could the government prevent someone from selling large vibrating pieces of rubber. That seems ridiculous. Orgasms are bad for us! OMG! Noooo! People are experiencing pleassure! Sinners! —MichaelGiardina

2005-06-09 15:14:47   I talked to the owner about it, and he said he voluntarily stopped selling them to stop the harassment by the Davis City Council. And yes, unfortunately cities can pass ordinanced regulating what is sold. —JimSchwab

2005-06-09 15:18:51   So sad though. I mean if they tried to get him to stop selling pesticides that were labled "Colored like candy to induce consumption by loud crying babies" I could understand. But sex toys? Who's going to get hurt with a sex toy (unless of course they forget to take the blades out of the reciperocating saw prior to placing the rubber member on top) —MichaelGiardina

2006-03-11 23:26:29   I love dropping by this place occasionally, even though I can't buy anything. They've got spiffy little pipes and gadgets, and gorgeous lighters. —AubreyJohnson