There are roughly 74,000 people living in the 'County Census Division' of Davis. The population of the incorporated City of Davis is closer to 64,000. This figure is lower because it does not take into account those living on the UC Davis campus or in the City's outskirts. 26,305 Undergraduate students and 33,307 total students attend UC Davis (2013). The average age is 25.2 years old, average income is $52,832, and median house value is $448,036. To learn more about the issues and people dividing the Daviswiki along ethnic and racial lines, visit our Race & Ethnicity page. Davis is often perceived as a small town because it has no directly bordering towns and because a majority of the California population (60% in 2008) lives in larger towns. However, Davis is in fact large relative to California towns in general because it is well above the median population of towns (28,672). These calculations capopulationdistribution.xls were made with data from the California Department of Finance.

In addition, in 2012 the U.S. Census Bureau determined that Davis was the 6th most densely populated urbanized area in the country, with 5147 people per square mile (see graphic).

In 1906, when it was chosen by the University of California as the site for its new University Farm, Davis was but a little hamlet called Davisville. It has since grown rapidly; since 1960, a year after UC Davis became a general campus of the UC System, Davis' population has increased by more than sevenfold. 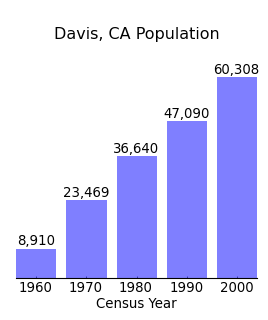 According to the source.

According to the source.

According to another 2013 source. Gender

Note that the UC Davis population is almost certainly a part of Davis as well. Compared it its neighbor city, Sacramento ("America's Most Diverse City" by TIME), Davis is not nearly as ethnically diverse. The University clearly contributes a great deal to the City's ethnic diversity.

UC Davis has the fourth-highest Asian population among American universites, behind UCLA, UC Berkeley and UC Irvine. In the Sacramento and Yolo metropolitan areas, Asian Americans form about 9.0% of the total population (2000 census).

In the Fall Quarter of 2004 there were 8,733 Asian undergraduate students attending UC Davis, making up 38% of the total undergraduate population. Of this, the three largest sub groups were students who identified themselves as Chinese (3,872), Vietnamese (1,270), and Filipino (1,054).

Among grad students, 414 students identified as Asian, roughly 10% of the population. Those who identify themselves as Chinese number 191 with Pakistani/Indians coming in second with 42.

more data as I find it. see also: http://facts.ucdavis.edu/

Education and employment (over 25)

Davis has a fairly typical education demographic for a college town. Davis was ranked "America's second most educated city" (after Chapel Hill) by USA Today in the 1980s, and holds the title of California's most educated city. A casual, incomplete survey shows this no longer to be true, Davis is behind at least two other small college towns (Chapel Hill and State College).

Mixed Race is a term used by people who wish to acknowledge their mixed race heritage. The term mixed race is used as opposed to biracial because people may be more than two races. Biracial tends to imply that one parent is one race and the other parent is a different race and can be leading, but both parents could be of the same mixed heritage (such as both parents being White and Black, themselves biracial and thus their children are biracial).

Multiethnic is a term to acknowledge the mixed culture and history they have grown up with. Anyone who has to identify as (African, Asian, Mexican, Brazilian, Indian, etc)-American will have a multiethnic background because they are negotiating a mixed of cultures between their home/native/ancestorial culture and the U.S. culture. Multiethnic can also be used by people who grow up as one race but identifies with another race's culture (such as a White person who identifies with Hip Hop or Mexican culture).

First and foremost, race and ethnicity are social constructs. There is no race gene that predermines one's race. Race and ethnicity will vary in different locations and social arenas. The definitions provided above

Currently at UC Davis, students are allowed to check all of the races they identify with. BUT when the university inputs this info into their system, the student's race with least representation at the school is marked as their only race.

Example: JoAnnaRich is mixed and marked off the Pilipino, White/Caucasian, Native American boxes but on University records will be marked as Native American. Other Examples:

I know a many people that grew up in Davis and I notice them having a lot of racist tendencies. I'm from Sacramento which is, according to TIME magazine, the most ethnically diverse city in America. Davis wants people to think it is so progressive but it is really a lily-white racist facade. When hate crime happens in this town I am not surprised. Evolution is best when ethnicities mingle. My main point is that without the university Davis would hardly be diverse. I would be even worse than what the statistics show because even less professors of ethnic backgrounds would live here. Davis may project the idea of them being the perfect progressive all American city but there is a reason why a picket fence and a Klansmans robe are the same color. -RobRoy

My Chinese friend was called Chink by two white men at a local gas station last week. Davis isn't friendly to non-whites. It must be tough living in such a racist town for non-whites. So sad. For such a small town, Davis sure does have a lot of hate crimes. Again, so sad. JohnTrombone

Can someone verify if the 65,000 figure includes UGs who live in dorms? The wording above is ambiguous. Also, some information on the economic backgrounds of UCD students, average parental income and educational background might be interesting

— As a former census-taker, the 2000 census (at least) DID include the Undergraduates who lived in the dorms. I know because I canvassed them. :) —prl

Ask Caliph Assagai about having someone shout "Get out of our town n***er" while walking around downtown.

The first set of demographics for UCD is wrong as it is not current (it's from May 2004). The second set was mentioned in the Aggie and was updated 1/2005.

I think individuals' behavior shouldn't speak for the whole town. Yes, a town is composed of individuals, but what I see posted here are isolated incidents, not mass hatred. Each city has people who think that people unlike themselves are really different and should be treated as such, tolerance just means not letting them hold power over everyone else. - AllisonEriksen

I don't agree that the examples posted above are isolated incidents. In a town with a 65% white demographic, stepping up to say, "Hey... this has happened to me a few times" usually results in a fairly defensive posture and essentially a brush-off. It usually doesn't seem worth the effort of defending oneself when pointing out instances of racism — it often seems easier to let people think what they want and just share the info among others who know what you're talking about. Ironically, it seems like those who wouldn't be considered racists [not speaking about anybody in particular here!] are the very same people who get most defensive when the issue is brought up. —AlphaDog

Discussion moved from Kevin Wolf. I saw Marty West on DCTV on election day evening. She chose to characterize the no on X voters as racist because we rejected this project and now Latinos wouldn't be able to buy a house in Davis. As if these people we see slaving in the fields out by Winters can purchase a $600,000.00 home. —PaulThober

My point of Latinos not being able to afford $600.000.00 houses was based on the fact that the median income of Latinos in this country is far less than that of Davis residents, and only about 10% of Davis residents would have been able to afford to purchase one of these homes. If we want Davis to be more diverse, developements like Covell Village are not the way. We need to develop truly affordable housing.

"...there are alot of field workers who save up money and buy houses in town." Oh, really?

And before the Spanish invaded "...most California homeowners by far were..." Native American. PaulThober