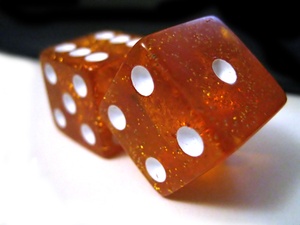 A typical pair of 6-sided dice 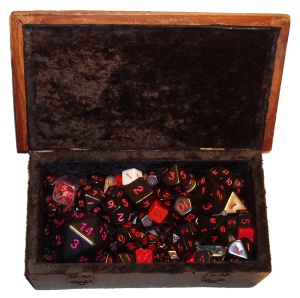 Dice are for sale at Bizarro world, Drom's Comics and Cards, and most drug stores.

Dice are most commonly used in Games but the uses don't stop there. Here are a few things that are done with dice:

If you're feeling destructive, you can make your own huge dice out of The Dominoes statue.

Many online retailers sell polyhedral dice by the pound, often mixed assortment that won't give you complete sets. The sizes, colors, designs, etc. vary. It may well be a worthwhile investment for any new gaming group, but local retailers need local business, or we'll not have any gaming stores to go into to oooh and aaah over new styles of pearlescent dice.

Here are some dice the wiki rolled just for you: