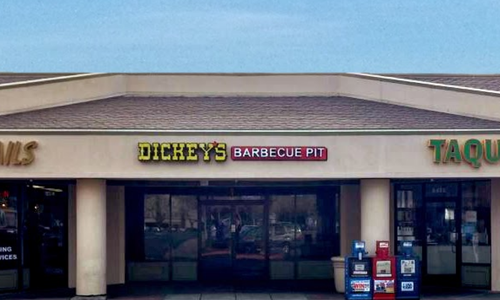 This entry refers to a departed business that has closed or left town. All information here is for historical reference only.

Dickey's was a fast casual restaurant in the vein of Chipotle and Panera Bread that specializes in traditional Texas Barbeque. As of 2014, the franchise claims just over 400 restaurants, with a locally owned & operated franchise near Save Mart in Anderson Plaza in North Davis. Dickey's is notable for its flavorful slow-cooked meats smoked using real wood on-site daily, with beef brisket as its flagship dish. The franchise also offers affordable catering (Usually $9.95 a head) with free shipping to any Davis location and online ordering to avoid waiting for your order to be prepared.

While Dickey's is certainly not cheap, their characteristic yellow cups are refillable in perpetuity and every purchase comes with self serviced soft-serve ice cream, which, while not of the highest quality, provides a nice palate cleanser.

The meals are fairly hearty and the servings are carefully measured out, with the sandwiches and meat plates boasting about 3.5oz of barbecue. Expect to spend at least $10 on a full meal, the most standard would seem to be the two meat plate for $10.95 which comes with two sides of your choice, two pickles, two onions, and a buttered bun. Since drinks are infinitely refillable, you'll only have to purchase one on your first visit, and the location has yet to have specific water cups, so a small soft drink cup is currently being provided free of charge. The barbecue sauce comes in three iterations: Normal, Sweet & spicy. They are offered in double boilers near the fountain drink so you can have as much of it as you want.

Interestingly, the location contains no tables with fewer than four seats, but Dickey's manages to increase the seating capacity from its previous life as a McDonald's Express. Speaking of which you wouldn't be able to tell what was in this location before. It's a transformation on the level of Sogas into Devere's. The Owner said ¼ million was spent on renovating the interior & it shows. Also the bric-a-brac on the walls isn't random, it's photos of the history of Dickeys with original location & stuff

Dickey's has an alcohol license posted, but none listed on their menu as of April 24th, 2014. They opened April 24th, 2014, replacing a McDonald's. They also have tiny pea sized cubed ice, awesome. 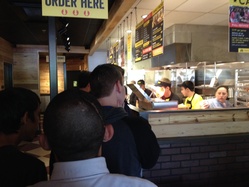 Waiting in line at the Grand Opening. 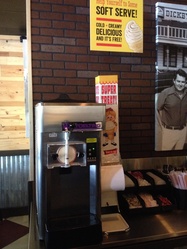 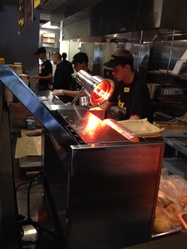 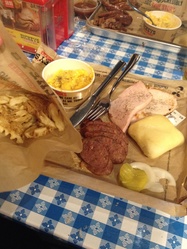 Two meat combo with turkey and polish with sides of waffle potatoes and macaroni and cheese. 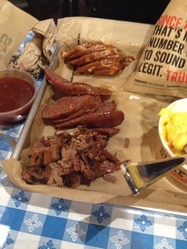 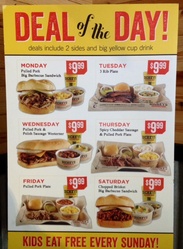 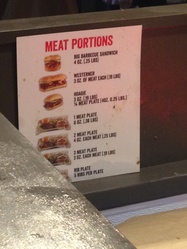 Have you been? Add a review or click Edit to add to the main entry.

2014-04-25 14:55:41   Tried the place out today and got pulled pork, brisket, and chicken breast. The food was much better than what I expected and was better than some of the BBQ places I had while in Texas. They also have 3 types of BBQ sauce - the sweet one was fantastic. It is more expensive than many Davis meals @ $11 for a 2 item plate or 13(?) for a 3 item, but I'll definitely be back when I want some BBQ. This is Davis' ONLY BBQ restaurant after all. —RyanMeyerhoff

Positives: Love the inside decor, very Texas grill decor and inviting. Great variety of sides, about 13 or so. I love the Baked Potato Casserole, Green Beans with Bacon, and Jalapeno Beans. Love the fact that you can help yourself to as much ice cream as you want and there are no strings.

Negatives. This space is way too small for the level of crowd this place gets. So this means a line out the door, most of the time. This may improve once the newness wears off, we'll see. Couple this with a food line that is very dysfunctional for moving people very quickly (with one register) and you have a bottleneck that takes forever to get through. I was the fifth person in line, and it took me a half hour to get through it. This has nothing to do with newness, just complete inefficiency of the setup and staff. They need a second register or they need to set it up differently so the line MOVES.

On the meats. Just meh. I have tried the pulled pork, beef brisket, and the carved turkey. On the turkey, it's really soft and reminds me of turkey roll. It is by no means fresh off the bird like with the accompanying texture. They also cut it too thick (for a sandwich). The brisket and pulled pork were very good, but way too salty. And I LOVE SALT. Still too much. And, this is the most ridiculous part - they had no mayo for sandwiches. They don't carry it. Really? They kept me waiting for a half our on an online order. Gave the woman waiting for the same amount of time for an online order cards for free meals for her trouble, and gave me nothing. Classy.

2014-04-26 20:21:38   I was thrilled to learn that a Dickey's was opening in Davis, and the long wait is finally over! My job takes me to Livermore every couple of months, and I always take the opportunity to stop by the Dickey's there - I love good BBQ. The food at the Davis location is at least as good, so no disappointments in that department at all. My family and I tried the brisket, ribs, pulled pork, and chicken: the owner has clearly learned the recipes well and knows how to use his pit. I'm puzzled by DonnieDarko's comments on saltiness, but I tend to ignore comments by those who violate the real-name policy anyway.

Dickey's restaurants all seem to run a bit of a slow line due to their diligence at keeping the meat moist by re-wrapping it. In my mind that is generally a good thing, and a sign of a good BBQ joint. With that said, the Davis location isn't up to even that relaxed cruising speed yet, which has some customers (including me on my first visit) grouchy. I was there yesterday for a late lunch, and I picked up a family pack for dinner tonight. During both visits, it was clear that the staff is still learning the ropes and a little overly nervous. I have to say, however, that between my visits yesterday and today the speed of the line and the confidence of the staff at least doubled. Also, the owner is clearly very dedicated and is doing his best to address any customer frustrations.

Bottom line: The food is great! The staff isn't quite up to speed yet, but I'll be back for sure. Given the dedication of the owner and the improvement they are already showing, I suspect that by the time I go back again in a couple of weeks they will be on point. —DaveMacKinnon

2014-04-28 14:28:29   I was excited to hear a BBQ joint would be opening in town. Went there for lunch. I got a sandwich plate that ran me fifteen bucks after all was said and done. The sides were good, and the meat was solid, but the portions were definitely not worth the fifteen bucks. JRs in Sac will run you about ten bucks for something comparable. —CarlosOverstreet

2014-05-08 13:49:18   I had a rather large order of 10 deluxe lunch boxes for pick up. I phoned in the order 24 hours in advance. Super friendly service! The order was ready for pick up right on time. I was even helped out to my car with all the bags. Everyone loved the BBQ! Fantastic customer service!! I will definitely be returning. —AngelaGerould

2014-06-17 12:42:54   They really tout their pulled pork - it's part of at least four specials throughout the week. The caveat is that the pulled pork is probably one of their least impressive meat options on the menu. When I ordered their Monday special and got a pulled pork sandwich, it was really dry and not very flavorful. This is forgivable though since their brisket and sausage in particular are pretty tasty.

I definitely echo other concerns about this place though: The portions are small and the prices are steeper than average. It's your only option in Davis for a genuine American BBQ pit, though, so if you're in North Davis and hungry for a brisket sandwich, it's worth trying at least once. Bottomless free ice cream while you wait for your order is a definite plus. —RomanRivilis

So the verdict is Dickies is good. You should try it. The owner & his wife are super friend & it's easy to tell they really care. ~Daubert

2014-10-07 18:15:25   Really? Have any of you ever even been to Texas? I think as a chain restaurant it is good. Just Please, do not compare this to a Texas BBQ! I find that it is good, depending on when you come. The earlier you arrive the better. If you show up late, you get the stuff, that has been keeping warm all day. The service is great! It is a clean establishment. I always love when a new place opens up in Davis. So I am very happy they have arrived. I just can't figure out why we can't have a "real" BBQ place. We are near cattle country. I have been wondering why there are not more places in the area that serve fresh meats and veggies. We do have access to both.

I am a California girl but I spent 20 years in Austin and I had to say something. Real Texas BBQ is in Texas! —Sherri

2016-10-05 13:29:18   Dickey's no longer serves the 1, 2, 3 meat plate and instead seems to be focused on tacos instead of bbq. The last time I went there I was told I could still get the same meat plate I always did, but when I was rung up it cost more than it used to. Looking at the online menu, it looks like they got rid of the waffle fries too (which were incredible). So if you want to go here, check out the Davis menu on their website, which looks completely different from other Dickey's. —rowe9804