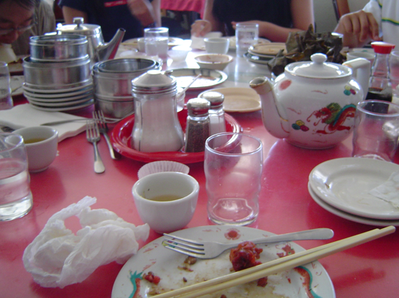 Dim sum is a type of Chinese food that consists of lots of finger foods, dumplings, turnovers, buns, and anything else traditionally served in a Chinese tea house. However, Dim sum is considered a delicacy in the Chinese culture, and it is something you only eat during breakfast hours. Dim sum can be steamed, deep-fried, pan-fried, roasted— you name it, they've got it and with enough types of meat and seafood to whet any omnivores palate. The majority of items contain shellfish and pork, so this style of eating is not all that fun for vegetarians, Jews, and Muslims who follow strict dietary laws.

In any dim sum place worth their salt, servers will come around every few minutes with rolling carts of freshly made food, or sometimes they'll make you choose the dishes from a piece of paper that would require you to "check" the boxes of your choice. Note: the English translations aren't very trust worthy, always ask what it is MADE of first. They'll give you anything you point to, and will charge you by stamping the bill you're given when you enter the restaurant. Whether they speak English or not is a real gamble, so be adventurous in your selections and don't be afraid to say "no" if there's something you don't want, or just ignore them as most Chinese do. They occasionally carry scissors, so ask them to cut up foods that seem too big for chopsticks or a fork. Or just stab it and take a bite. Remember, dim sum isn't sushi; it's okay to not stuff the whole thing in your mouth. In fact, it's probably not a good idea to stick the whole dumpling in your mouth. Also, a lot of the intended flavors could be masked by soy or hot sauce, so don't automatically douse your food.

Dim sum is best eaten family style, i.e. the food is ordered for the table rather than an individual person. Your best experiences will be when you go with a large group of people. That way, the costs are distributed and you can sample more varieties of food. This strategy is especially important for adventurous people or newbies, who might get a dish that no one likes.

While there isn't a more traditional dim sum house in Davis, you can still try it out!

While Davis regretfully does not have much in the way of a dim sum house, but there are plenty in the Bay Area, and a few in the Sacramento area that serve dim sum:

These restaurants offer dim sum around the hours of 10 am-3 pm daily, although it is said that some places have a better selection of dishes on the weekends when it's busier.