Rather lengthy, but not verbose, magniloquent, or overly wordy (which we are told does not require a hyphen) candidate statement 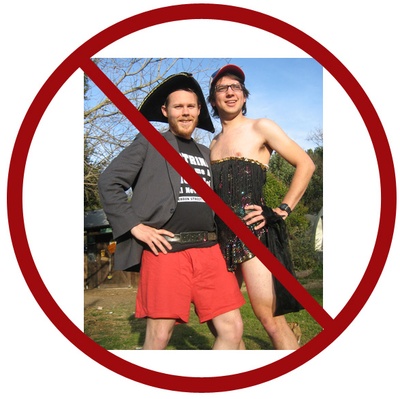 Just say no to Rob and Arlen for ASUCD executive office

Don’t vote for us. You should vote for Kareem Salem and Julie Hooper instead. The two of us are fifth years and we have put in the effort to be on the ballot because we have been involved in the campus for a long time and want to leave it in good hands when we leave.

Rob Roy is an English major and former ASUCD Senator and Arlen Abraham is Beer major and a former Aggie Editorial Board member. After holding open interviews, we have chosen to endorse the following senate candidates:

These candidates, we believe, want to serve as senators in order to improve student life and are not simply running to enhance their resumes.

Here is a list of things that we would like to see done by ASUCD or the University and feel that Salem and Hooper are the Executive candidates that have the know-how and will to accomplish:

Make Classical Notes free and available in online in PDF form (put advertisements on the website in order to pay for the service). Stop publishing the Student Directory (it is largely inaccurate and waste of paper). Students who print less than the allotted 60 sheets in campus computer labs should be allowed to have these sheets rollover to the next quarter, or transfer them to a friend.

Make every new building on campus a LEED Platinum certified building. When renovating the CoHo install an large number of electrical outlets so people can charge their laptops, integrate solar panels on the roof, and also install water spout gargoyles ('cause UCD should look more like Hogwarts). Start an iPod/cell phone charging service out of Aggie Student Store. Need your iPod charged? Stick it in the ASS.

Improve SISWEB and Geckomail, increase storage capacity, and until then we encourage students to forward their mail to Gmail (you can still send email with an @ucdavis.edu).

There should be more coordination between student representatives to Academic Senate committees, so that more students know what’s going on among the people who actually run things.

Hire a permanent adviser for Entertainment Council so they don’t have to start from square one every year. Also, since the ARC was paid for with student fees the EC should be able to easily use the ARC Ballroom without hassle. ARC public events manager Rebcecca Miller has denied EC use of the Ballroom on several occasions, stating even that the "ballroom" is not fit for dancing. WTF, mate?

2007-02-06 10:45:38   Reading this page, I'm getting flashbacks of Rob repeatedly saying during senate meetings "There's the letter of the law and there's the spirit of the law." Rob, doesn't this seem to be going a little overboard? You used to argue for the spirit of the law over the letter of the law. You're not running for anything, but you're using ASUCD funds for newspaper space and flyers to promote your endorsements? All because you collected sufficient signatures? I don't have a dog in this fight, but I wish you were running for real- a genuine third option for the executive ticket is always a good thing. I know you've got good intentions, but I'm not too keen on the approach. —ThomasLloyd

2007-02-06 19:28:40   Thomas, I've always been known as someone who never knows when to walk away from a fight. Arlen and I are having fun with a cause we believe in. Anyone can run for office so long as they get the signatures. I'm reminding people of the greatness of democracy (and choice voting). Also, having been in the trenches I'm just trying to get my ideas for the ASDUCD War plan documented and popularized. I'm glad that you're still distracted by ASUCD despite all the wonders of Boalt - lord knows I would be, because I can't get enough. —RobRoy

2007-02-06 21:23:06   "overly wordy" is a compound modifier but it doesn't require a hyphen because "overly" specifically tells the reader what word it's modifying ("wordy"). In fact, using a hyphen would make it grammatically incorrect. —AmyZimmerman