Project Compost has a mission to save the world from organic oppression.

They realized that this meant educating students on the UC Davis campus how to compost, no matter their circumstance. Because most first-years live in high-density living arrangements in the dorms, the compost directors came up with a solution: make fully-enclosed worm bins for the first-years to have inside their dorm room! Thus, no space outdoors is necessary to compost.

Derek Downey, the current director of Project Compost, first became fascinated by worm composting while living in the Malcolm Hall Dorm building in 2004. He most probably was the first student to have a worm bin in his dorm room and has since been dedicated to spreading the good news. He even started the Project Compost Worm Farm in March of 2006 with the intention of giving all first-years the opportunity to start their very own worm bin for free. When Derek started his worm bin, it cost him $25 for the worms, ordered online, and $10 for the plastic bin. Now, he procured funding through ASUCD to pay for the plastic bins and now has hundreds of thousands of worms to hand out for free (the whole worm farm runs on garbage: the bins are made of scrap wood and the worms are fed compost and coffee grounds). 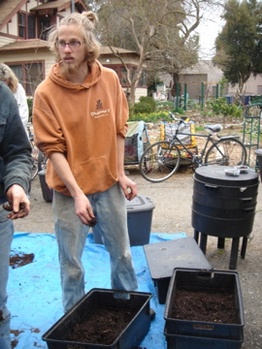 Two years after starting his dorm worm bin, Derek has come to realize how easy and enjoyable it is to compost and to spread the good word. 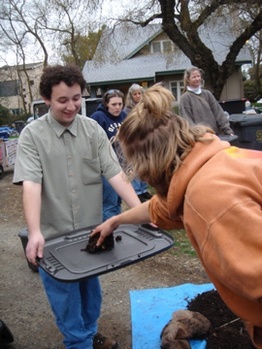 Handing out worms to a dorm resident eager to compost 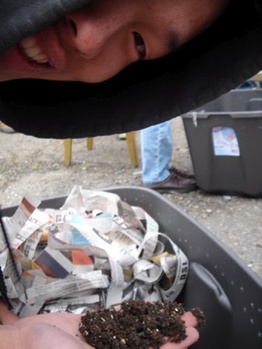 Black Gold!!! Daniel, one of the compost masters living in Malcolm, showing off some of the compost his worms made from his food scraps that otherwise would have gone to the landfill. 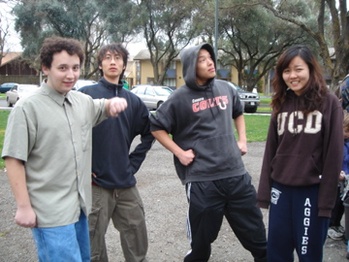 We have worm bins in our dorm rooms and we're proud of it! Don't be jealous... start your own!

The compost masters called on all RAs and set up mini-compost-workshops or wormshops to teach the first-years how to start their very own worm bins.

Though Student Housing has a rule against worm bins in the lounges (what the heck?) there is no rule against having a worm bin inside the dorm rooms. In Fall 2006, more than 15 students from Malcolm Hall started their own dorm worm bins and are feeding their worms: banana peels, apple cores, orange peels, coffee grounds, left-overs, moldy bread, newspaper, and other organic "wastes." By winter, these cool first-years had their first batch of finished Black Gold (worm castings) which they could use in house plants, gardens, trees, or for educating other students on the amazing opportunity to compost anywhere!