I suddenly heard a rush of sound. A whole group of people — one with a large instrument (a fancy looking fellow), another a homeless man with a guitar, and some other folks singing and clapping — were playing around, making music, right there on the corner. The sound lit up the whole block. - PS

Downtown Davis is generally considered to consist of the dense collection of local businesses that lie where the lettered streets intersect with the numbered streets. The downtown also includes a number of apartment buildings and private residences. Downtown Davis is cute, sweet and quiet—most of the time, anyway. There are a number of helpful map signs in case you get lost or are looking for something in particular. It's one of the best places to spot town characters like the dude that lives in his bike.

Downtown is easily walkable. Parking is available throughout downtown, so you can drop off your car and brave the streets on foot. Most of downtown is subject to 60, 90, or 120-minute parking restrictions on weekdays until either 6pm or 10pm (generally, the closer you get to campus, the shorter the time limit and the later it lasts into the evening). Watch out for the paid parking lot by the E Street Plaza—there are signs clearly labeling it as paid parking, but they're possible to miss if you're focused on not running over pedestrians and cyclists on a busy day.

The area is also very bikeable! There are bike racks all over downtown and, in case you run into any trouble, a number of bike shops. Keep a sharp eye out, though, since there can be a lot of traffic, cars parking and de-parking, and car doors opening suddenly. The city has even started painting "sharrows" or shared lane markers that'll direct bikes out away from the curb, into the center of the lane, in some of the more hazard-prone areas. For the uninitiated, the bicycling tips page is worth a read before venturing downtown on two wheels.

Downtown is bordered in part by the train tracks, and it's home to a very attractive train station. Railroad aficionados can go railfanning there, while travelers can catch a ride on Amtrak. You might even spot some people protesting (or climbing) the controversial Olive Drive Railroad Fence. The station has a fairly large parking lot that can come in handy on busy evenings when street parking gets scarce.

If you're looking for something to do downtown, don't worry. You'll find it. Wander around and check out some of the art, both in galleries and out in the open. Central Park is a great place for a picnic or, if you're there on a Wednesday eve or Saturday morning, you can check out the Farmers Market. Many of the restaurants and cafes have both indoor and outdoor seating if you want to relax with a drink and do some people watching. There's all sorts of shopping, and all three movie theaters are right downtown.

Dating back to 1868, the grid of downtown was created by the Davisville Land Company.

See Navigating Davis for other areas or DavisDowntown.com for the DDBA website.

This list can occasionally get a little bit out of date. If you see something that doesn't look right, fix it! If you want to keep an eye on the comings and goings downtown—and you don't want to get out of your chair and actually go downtown—you can check out the Arriving Businesses and Departed Businesses pages. 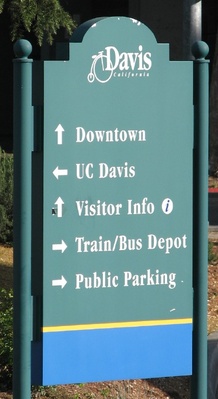