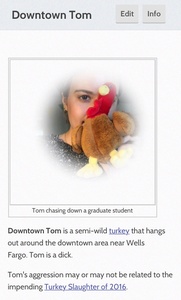 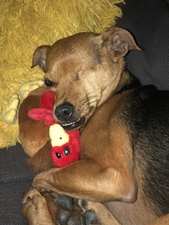 Downtown Tom is a semi-wild turkey that hangs out around the downtown area near Wells Fargo. Tom is a dick. Tom's aggression may or may not be related to the impending Turkey Slaughter of 2016.

If Downtown Tom approaches you in the cold hours of the night, do not play dead! Stand tall, clap your hands, use nearby objects as a shield, be the bigger bird!

Tom's belligerent behavior has lead to the passing of an ordinance to euthanize aggressive turkeys. Attempts by wildlife officials to relocate Downtown Tom have failed, and they only managed to chase Tom out to 8th street. If you wish to be a hero, save this raptor from the death penalty by taking Tom out to greener pastures.

I have seen turkeys chasing down foreign exchange students. I got out of the car & made myself big. This was on 8th street a while back. Might have been DTTom - Daubert

Some speculate that Downtown Tom is currently being held captive by the Davis Police Department. #FreeDowntownTom