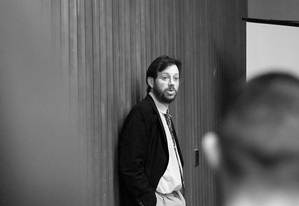 Another photo of Andy delivering his "last lecture". Photo by Elise Kane.

Dr. Andy Jones teaches writing, poetry and literature classes at the University of California, Davis. Having run the English Department's Computer-Aided Instruction Program for many years, Andy teaches most of his classes in computer classrooms. As part of his work to improve instruction at UC Davis, Andy also works as the Faculty Liaison to the Teaching Resources Center, for whom Andy coordinates and hosts the meetings of the Faculty Mentoring Faculty Program, and helps to run the yearly "Summer Institute on Teaching and Technology." A previous longtime member of the Campus Media Board, Andy acts as Faculty Advisor to The Voice, the Undergraduate Medical Journal at UC Davis, and to Nameless Magazine.

Andy teaches many writing classes for The University Writing Program, including UWP 104D (for future teachers). In recent years, Andy has taught English 45, Introduction to Poetry; English 30B: American Literature from the Civil War to the Present; English 144: American Realism, English 156: "Introduction to the Short Story," and TCS191: Writing Across Media (for Technocultural Studies). Andy will be teaching English 110A, "Introduction to the Principles of Literary Criticism: Plato to Coleridge for the Department of English during Summer Session I, 2010. He loves teaching, mentoring and inspiring students to think critically and artistically.

Andy has also taught many freshman seminars on topics such as Jazz and Literature, The Beat Generation in Poetry and Film, Creativity and Technology, Writing About the Times, Writing About the Future, and Becoming Borg. in Spring of 2008 Andy taught a seminar called Writing for the Wiki: Publishing in an Age of Ubiquitous Authorship.

In 2006 Andy's book of poetry, "Split Stock", was published by John Natsoulas Press. His co-author is Brad Henderson. About a hundred and fifty people attended the book release party at the Natsoulas Gallery. His poems have appeared in many other small journals and newspapers, including "Epicenter" and "The Sacramento News and Review." Andy is working on other book projects now, including a new book of poetry to be titled "Cages," a book on putting poetry into prose, and a book on parenting (co-authored by his wife, Kate). He is represented by the Literary Agents Michael Larsen and Elizabeth Pomada.

On February 15, 2006, Andy was also the first UC Davis professor to participate in ASUCD's Academic Affairs Commission's "Last Lecture Series." Conjuring up the charitable spirit of Ralph Waldo Emerson, Andy gave a public lecture on approaches to magic; Andy spoke of the imagination and its helpers and detractors, what poetry means to everyone, and a romantic story that took place many years ago in London (and which should not be spoiled on the Internet). So if you meet Andy, ask him to tell you his romantic "Trip to London" story.

In the spring of 2006, ASUCD presented Andy with the Educator of the Year Award.

Andy also hosts the Davis-based reading series Poetry Night on the first Wednesday of the month at Bistro 33 (226 F Street), and on the third Thursday night of the month at the John Natsoulas Gallery at 8pm. Past readers have included UC Davis faculty Francisco X. Alarcón, John Boe, Joshua Clover, Clarence Major, Sandra McPherson, Joe Wenderoth, and Alan Williamson. An open mic always follows the featured reader, and campus and community performers are encouraged to participate. Find out more at the "Poetry in Davis" group on Facebook.

In addition to his poetry-centric work on KDVS and as host of Poetry Night at Bistro 33, Andy regularly volunteers his time for educational and literary causes. For the past decade he has chaired the Essay Evaluation part of the Yolo County Academic Decathlon. He serves the California Arts Commission as a judge for the Sacramento "Poetry Out Loud" competitions, he is the Chair of the Community Action Committee of Davis, he co-authored the position of Poet Laureate of the City of Davis, he has hosted fundraisers for Haiti disaster relief and Tree Davis (through Davis Sunrise Rotary), and for the past six years he has volunteered as poetry faculty for the San Francisco Writers Conference.

Andy lives in Davis with his wife and three children, Geneva, Jackson and Truman. He can be found on Facebook (where he friends actual friends, rather than fans) and on Twitter at http://twitter.com/andyojones .

I once helped Doctor Andy move. He gave me records and bought me a pizza. He is a great guy and may very well be the coolest professor on campus. He was even childhood friends with Ian Mackaye of the seminal punk rock band Minor Threat and of Fugazi. -RobRoy