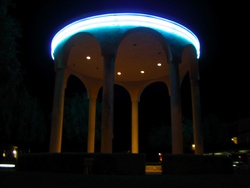 The sculpture that defines the circle.

Drew Circle is a a street in South Davis that branches off of Cowell Blvd.. This is a popular spot on the W Bus Line for students because it is home to Allegre Apartments, Sharps and Flats, Pacifico Cooperative Housing, as well as Tanglewood. Drew Circle is often clogged with traffic, shopping carts from Safeway, and as you drive on it you will come across a turnaround with a tacky sculpture thingy with neon blue and green lighting.

The end of Drew Circle was originally planned as a new Frat Row in the late 80's/early 90's with fraternities/sororities buying lots and building their own houses there. Thusly the odd pseudo-greek gazebo at the end. It never panned out, and it eventually filled in with apartment complexes!

Recently, there was a stoplight added at the Drew Circle/Cowell Blvd. intersection! This is considered a blessing to many residents of the street, because now they won't have to wait ten minutes to make a left turn, or fear for their lives as they try to cross the street to the bus stop. It has also slowed down traffic on Cowell, which has become a pain to some. The addition of a stoplight here (although the sign mistakenly says "Drew Ave" —the street on the other side of Cowell— instead of "Drew Circle") is the best thing that could have happened to the city, aside from if they fixed the Worst Intersection in Davis.