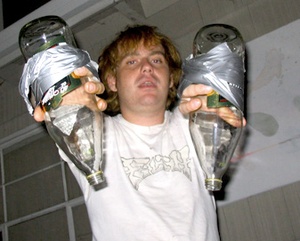 The culmination of a game of Edward 40 Hands

Drinking games are games that involve the act of drinking. Some, such as the universal drinking game, are simple. Others are complicated and pressing. While drinking games can be fun, they can also be dangerous — excessive, binge drinking is never a good idea. Be safe and responsible in your drinking.

In a 2004 survey of 35 UCD students conducted by The California Aggie, students had played 59 of 105 drinking games listed by www.webtender.com/handbook/games. Students also mentioned moose and sevens, two games not on the list. -California Aggie

Often times while playing drinking games, one hears a lot of Memorable Quotes. Why not add quotes you've heard?

Drink, while playing a game.

See also Strip Games for the obvious (strip games can also be drinking games, of course).