Arboretum Mallard duck Despite the amazing collection of well cultivated plants existing in the Arboretum, not to mention all the other birds and animals, the ducks seem to be what many visitors remember the most.

Perhaps this is because there are so many of them (they are, in fact, overpopulated) and many ducks seek out humans. What do people remember most about these ducks? Begging for food. Unfortunately, people feed ducks bread even though it's unhealthy and potentially dangerous to them.

Below are some of the dabbling ducks you might encounter in the Arboretum. (See the Bird page for diving ducks and other waterfowl.)

Battle of the Sexes

Male ducks are called "drakes" and females "hens" — if you're not sure, check the tail feathers and the voice of the duck. Males have curly tail feathers during the winter and spring and have a much raspier voice (even when there's no shouting after the girls to be done). The hen's tail feathers remain straight year-round and her voice is much clearer/louder. During the summer, mallard drakes go into "eclipse" — their plumage changes to brown and they look like the girls. Don't worry, the voices don't change with the summer styles; our drakes are usually quite secure in their collective sexuality.

Young ducks go thru several changes of feathers before they get their final 'grown-up' plumage; first-year drake mallards look like hens. Because of lots of hybridizing, the mallard flocks at the Arboretum (and in most parks) have many more color variations than 'wild' populations. 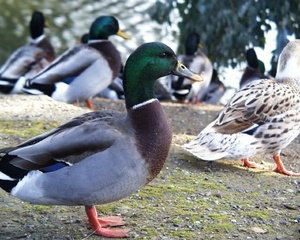 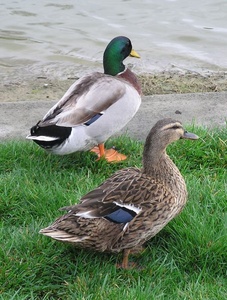 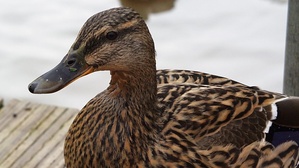 3 Mallards sleep under a native redbud" in the Arboretum 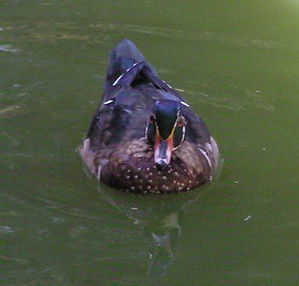 Don't be fooled by its red eyes. This is not a UCD undergraduate, but a male Wood duck. 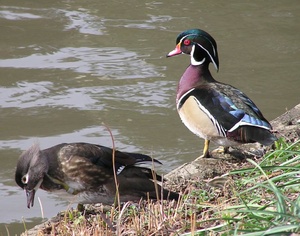 A male and female wood duck. 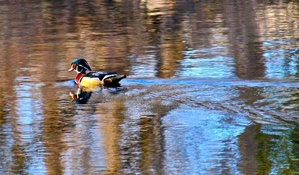 A male at West Pond

Other Ducks and Mixed Photos

All of these domestic ducks are derived from the Mallard. These ducks are usually released by "well-meaning" duck owners who believe their pets will be "happier in the wild" — not always the best idea. To be blunt, these pets were abandoned and left to die, which is a crime under local or county animal cruelty laws. Up to 40 or more pet ducks are abandoned each year in the Arboretum, and these abandoned pet ducks is the main cause of the overpopulation problem in the Arboretum. Pet ducks that have been fed and sheltered on a 24/7 basis lack the necessary skills to survive in the Arboretum where there are numerous predators such as dogs, racoons, river otters, owls, fox, etc. The surviving released animals then breed with our wild Mallards and spread their domestic characteristics into the population. But, hey, what would the Arboretum be without ex-pet ducks nibbling at your feet and begging for food or else they die from starvation since they never learned the basic skills to forage for food? 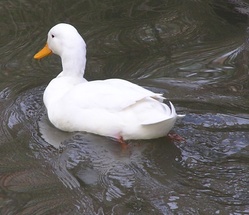 A Pekin drake (domestic breed). They make a tasty dish from these in China. Quick! Swim away little ducky! 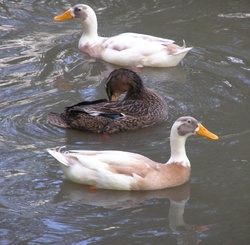 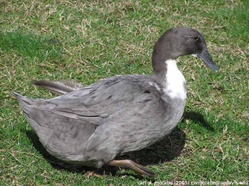 A Swedish Blue hen (not the scientific name) waddles along. 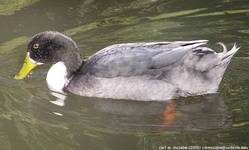 A Swedish Blue drake (not the scientific name) takes a drink. 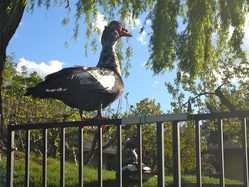 Muscovies are a domestic species with a VERY wide color palette and they sometimes hybridize with other domestic ducks; the only really identifiable marking is their 'bare red face with a pronounced caruncle at the base of the bill' — size and shape varying by individual. Originally grown for food, many have escaped and there are now colonies of Muscovy Ducks in many parts of the country. They are still considered 'domestic', so don't expect to see them on a birding list.

There was a July 16, 2004 study done on campus that calculated the number of ducks that the Arboretum could support. The arboretum has too many ducks.

It is all around a bad idea to feed wild animals (including ducks) because it makes them dependent on humans for food.

Unfortunately, people feed ducks bread even though it's unhealthy and potentially dangerous to the ducks.

Do you think that college students are like ducks? Aggie columnist Michael Giardina thinks so.

I used to love ducks. But I recently heard that the males often go around in groups pinning down female ducks and "raping" them. Is this true? Sounds pretty horrible. If so, should we really compare them to college students? ColinWen

I had a dream recently, where I was down by the Arboretum, trying to find ducks. Because in this dream, I was trying to find God, and it made absolute sense to me, that in order to find God, I needed lots of ducks. And lo and behold, God appeared, amidst a flock of mallards, down near the Redwood grove. And God looks like a chocolate colored poodle, with a human head completely covered in dreadlocks, with no face...or maybe her (it had a woman's voice) simply was not facing me. I have no idea what the dream meant, other than ducks being necessary to find God... -MatthewTom

2007-01-02 23:00:10   Is there any law prohibiting people from killing and eating the ducks? How about crows? Provided one doesn't use a gun it's not a hazard to anyone and a much better alternative to factory farming. There certainly is no shortage of the birds. —EfremRensi

2007-05-17 18:44:44   Yes there is a law against it. I think technically Putah Creek is a wildlife preserve and it's considered hunting without a permit? Call the campus police and they can tell you. —JenniferKucich

2007-07-11 20:35:50   Several times, I've seen big groups of ducks in a frenzy, quacking like mad and exploding out of the water. Seems they're chasing after some guy riding a bike through the Arboretum throwing big handfuls of feed out for them as he goes. I guess it's better than white-bread crumbs, but 4 of the 5 items on the list above still seem to apply. If they're trying to discourage people from feeding the ducks, they should probably find a way to talk to that guy...he must be doing it pretty regularly because the ducks seem to recognize him on sight! —DukeMcAdow

2010-07-01 06:52:23  Anybody have any info on the ducks in the Stonegate Lake area? I've never seen anything like them before we moved to the area a few months ago. The majority of them have red faces and vary in color for the rest of their bodies—black, white, brown. Somebody just told me the growths on their faces is from all the pesticides and other contaminants in the lake, so now I'm a little freaked out. —KyanaTaillon

2010-03-27 00:13:07   Duck rape is a serious social issue—write your congressman or woman today! Something must be done to preserve the dignity of these pitiful hens! —ArianeMetz

2010-05-28 03:39:23   Wild Mallard ducks are protected under FEDERAL LAW known as the The Migatory Bird Treaty Act of 1918 so it is illegal to harm or kill these birds or nests or eggs, unless exempted per the law. Many ducks are unfortunately killed each year from people throwing rocks or other missiles, or hit and killed by bicyclists, people on skates or skateboards, cars, etc.

Duck rape is common and part of their behavior and occurs mostly from April to June. Unfortunately, the drakes can drown the hen when the rape occurs on water because they hold her head underwater. It's common to see seven to ten drakes gang raping a helpless and exhausted hen. You can see the hens missing feathers on their heads and neck as a result of these ongoing rapings.

Since feeding bread harms and ends up killing the ducks, it's clear to see feeding ducks DO NOT contribute to the over-population. Since the body of water is a sewer (along with predators), the duckling mortality rate is north of 80% and is a death rate that is 4 times what happens in nature. The arboretum is a death trap for ducklings. The overpopulation is the result of people abandoning pet ducks (i.e, the runners, blue swede, campbells, pekins, etc) to die in the arboretum and a small number do survive. As much as 40 or more pet ducks are abandoned each year and due to the math concept of Law of Large numbers, abandoning 40 ducks or more ducks each year will result in an overpopulation problem. Abandoning your pets is a crime under the theory of animal cruelty, which falls under local or county laws.

As of June 2009, there were over 600 ducks in the Arboretum, and as of April 2010, there is barely over 100 ducks remaining; these statistics exclude the over 200 ducklings that die each year from living in the sewer — it's a horrible place for ducklings and only the strongest survive. The main cause for the loss of over 500 ducks in 10 months is people giving food (like bread) that harms these ducks and make them sick and thus easier for the predators to kill the ducks.

Lastly, the official policy of the Arboretum is they don't care about the ducks since the ducks eat the plants and other vegetation. This is an arboretum as in arbor means trees like a living tree museum. That is why the facist Arboretum officials use poor proganda in a vain attempt to fool the educated minds in Davis. There is NO duck overpopulation today AND if the Arboretum Officials remove abandoned ducks in a timely fashion, they will be no overpopulation in the foreseeable future. Remember, the ducks can have all the ducklings they want, but with a high mortality rate, it's mathematically impossible for dead ducklings to contribute to the overpopulation problem. Don't be followed by the poorly-constructed facist proganda. —jasoncw

2011-05-13 22:41:48   The Davis ducks still amaze me. When I walk through town they walk right beside me. So used to humans. They are strolling the streets going about their business just like I am. Part of me wants to spark up a conversation at times. —Dozer 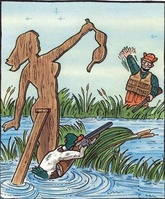