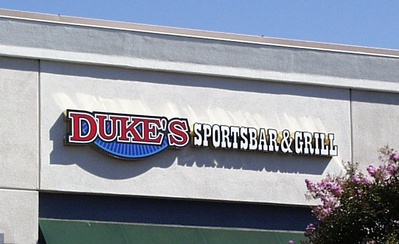 They had a full bar, plus "drink specials" Thu-Sat 9:00PM-close, and also "after school specials" 2:00PM-6:00PM. There were TVs all around, like it or not. The place had a warm brown decor, thanks to the wood used throughout. The tables and chairs were all wood. It was nice and clean. They served Davis tap water.

**Duke's was shut down/evicted in late December 2006. Apparently, they violated their lease by staying open later than midnight. The owners have no plans of re-locating or re-opening the business.**

Went to this place the other night and had the footlong hotdog with garlic fries. It was great and really reasonable. Duke's also has a great happy hour from 2-6pm. —SuperRedhead

2005-09-27 20:31:10   I went there one time with a female friend for dinner on a friday nite and the servers were drinking shots with friends... the food was ok tho. I havent yet gone just for drinking yet. —PaulAmnuaypayoat

2005-10-24 12:31:50   The waitresses are hot but flaky. Ours came back two times, once to confirm who's tab the pitcher was going to be on and once to confirm the type of brew. —DomenicSantangelo

2005-10-24 15:50:70   I've been by here a few times, and twice i've seen a large stretch SUV outside the place with a chauffer/bodyguard. Anyone know who this is that frequents the place? —AdamYergovich

2005-12-08 12:55:00   I went there with my fiance because the davis wiki had good reviews. Basically, the place pissed me off so much I am writing this right now. I got "fish and chips" which were cold on the inside and chewy all through. The fries, though, were good. I told the waitress about the "fish" and she promptly (5 minutes) told the cook to make some more. In about 5-10 more minutes, I got more "fish." This time, they were crunchy, but only because they were still mostly frozen. I told her again and this time she got the manager. I stepped aside as the manager "inspected" my food. The manager never approached me, but the waitress came and gave me $5 off of the $11 plate. The fries were good, but not $6 dollars good. I left no tip, but I did write that the "fish and chips" charge should go to our waitress who was nice after all. I also wrote on the receipt that I would put this on the Davis Wiki: PLEASE DON'T GO TO DUKE'S. I realize that it wasn't that bad, and the atmosphere was actually quite nice, but please, choose somewhere else. —DanielDeisenroth

2006-01-09 22:31:53   The waitresses need some serious training. I got two pitchers with friends delivered to my table—with no glasses. "Uh, can we get some glasses?" after waiting a bit.....out she comes with 8 freshly washed, HOT glasses. Sit at a table to stare at the hot servers. Sit at the bar to get competent service. —JeffSpeckles

2006-03-03 15:55:11   I went to Duke's today to check it out and have some lunch. I was seated at a tabel that looked into the kitchen. After I placed my order, I glanced over at the kitchen and noticed that the cook wiped his nose with his hand, and then continued to prepare the food orders. I kept watching, and he repeatedly wiped his nose with his fingers and hand. I became totally grossed out, cancelled my order, and promptly left. —TiffanySnell

2006-04-03 16:51:08   The spinach and artichoke dip is really bland. I never thought I'd ever say that cheese was tasteless, but it was. Ever heard of salt and pepper? For the price- for any price- I should've gotten more than just a handful of chips. —JennaChan

2006-04-04 19:48:01   Um, the service at this joint is the worst ive ever seen. The girls drinking there cant be older than 15. How is this place still surviving with the owners constantly intoxicated ? No one washes their hands, there are no rules to be followed. This place is a disgrace to the davis community. I hope somebody realizes the illiegal behavior that is allowed every evening and shuts this dump down. Yeah, im not a big fan. Pukes. —ElandEa

2006-08-09 22:32:53   I remember the first time I went to Duke's, the food was damn good. The burger came with thick pieces of bacon, large wedges of avocado, and the burger was thick and juicy. It came with a delectable side of fries tossed with garlic and flat leaf parsely. This was samsara, nirvana, and heaven all on a plate.

But what happened? Apparently over an eight month period, things just fell down the slippery slope. Sports bars are supposed to have awesome food, good cheap beer spilling over the pitchers, and a game on the screen. Well, two out of three ain't bad. And honestly, the food isn't bad after a few drinks or with a beer, but on it's own it lacks that Americana gusto bar food should have the quality of.

Rob and I went down for a quick bite to eat. I had the pork ribs, and Rob had the skirt steak. Both came with the general vegetable medly you expect at a steakhouse, they were good, they were vegetables. Nothing more. The garlic fries this time were dissapointing, Robs were only just warm, and both of ours had the garlic burnt. I do believe they tossed the fries with the garlic first, then cooked them. Bleh.

The ribs were meaty though a bit too wet, and covered in general BBQ sauce. Nothing to rave about, but nothing to put down either; all in all they were good. Rob's steak however, I must admit was damn fine. Damn fine! We were both genuinely surprised. I tried to steal some from Rob, but the bastard kept shooing me away, and wasn't falling for the, "Hey, look over there!" routine.

We also ordered some spinach dip before hand. Skip this one. It's the very definition of bland. I even took the time to write on the check that it needed garlic and tobasco, an action I would normally deem rude, but the fact that they had the nerve to serve it was license enough. I was even shocked that I did that, but then again, I doubt that Judy Rodgers is heading up the kitchen rather than some frat boy with a part time job over a stove. I'm sure the note was ignored.

The burgers there are still pretty good, but you can do better at the Grad in Davis, or Hamburger Mary's in downtown Sac. If you want a sports bar with sports bar food, Duke's will do the job. Basically stick to the lunch menu, but ignore dinner. And get a pitcher, regardless what you think of Duke's, a pitcher makes everything better. —ProtoGarrett

2006-10-15 17:37:40   Ate here last night with friends around 8pm. The place was completely empty and the service was slow. My friend and I both ordered nachos, both were cold when we got them. We sent them back to be heated up and they came back the same temperature. My friend's nachos had uncooked beans and later got a stomach ache. This place has mediocre food at best. I don't recommend going there for the food. —EmmyMelton

2007-01-23 21:24:07   RIP my dear friend. I'll never forget you or all the wonderful Sundays spent here. Watching football will never be the same for me again. You'll be missed dear friend —RussellAnderson