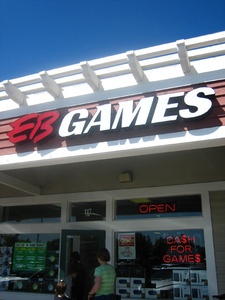 EB games is a video game store in Davis. They sell new and used games (PC and Console), systems, and accessories. They will also buy your used videogames for cash or in-store credit, but don't expect to get much. They also have DDR pads so you can play at home. Additionally, they sell games for older systems like Gameboy and Gameboy Color, but appear to no longer be selling Dreamcast, PSX, N64, Genesis, or NES titles. They claim they have no Mac games for sale, unless they are selling a PC game that has built-in Mac support. For $6, you can buy an EB Edge card that gives you 10% all used dvds and video games. The service lasts for one year (from date of purchase of the card).

They celebrate Winter-een-mas, offering sales during the holiday.

Gamestop bought EB Games in 2005. They probably won't be changing anything until mid 2006.