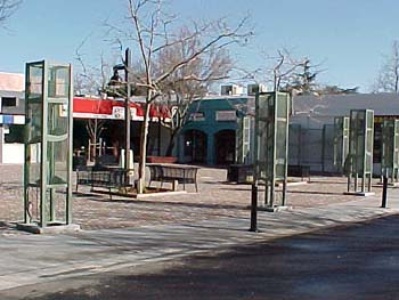 E Street Plaza sits across E Street from Peet's Coffee and Tea and Bizarro World. The plaza was created in 2000 by replacing a parking lot with an attractive plaza. It is bordered by Baskin Robbins, Yeti Restaurant, and RC iPhone Repair. It includes a performing area and benches for relaxing while you eat your ice cream or listen to the music on a summer night. The Davis Downtown Business Association has been organizing a spring/summer music series for a number of years now. A free parking lot was opened in 1966 after demolition of 1900-era homes to make way for a dense, walkable downtown. The lot became metered in 2008. 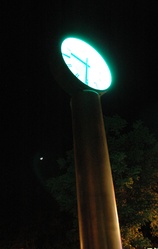 E Street Plaza is also home to a shiny metallic clock/fountain combination named Clepsydra, placed there in 2004. When the clock was first installed it had cast glass panels, but those proved to be less stable than needed and the design was altered. When you see it now it helps to picture it as it could have been with the water flowing over a column of wavy glass causing a continual sparkle and dance of light. (The artist and the material scientist should be friends — sung to the tune of The farmer and the cowman should be friends)

Every non-rainy thursday night since 2006 there is Fire University—a communal fire spin jam. The current hours as of 2022 are 9 p.m. - Midnight.

Starting in early December of every year, you can see the holiday tree standing through the winter holidays. 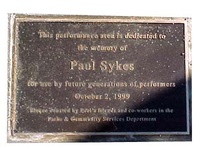 The stage area is dedicated to Paul Sykes. It had been the decision of the Davis Downtown Business Association and City of Davis Employees to dedicate the performing area to Paul Sykes, lead singer of The Band Lawsuit. Engraved bricks and a plaque had been placed in the stage area.

The night of the dedication, a crowd assembled to watch a videotape of Paul's last monologue show at the Palms Playhouse and listen to music by Paul's three siblings, members of his former band, and Chris Webster of Mumbo Gumbo

2005-01-12 00:10:15   Is the performing area open to anybody to use? Walking past it, I had wondered if Bev was connected to the memorial plaque (I had thought it was a father or other older relative). —JabberWokky

I have seen street performers play music in the plaza... not sure if that's what you mean. This has deterred me more than once from eating on the outdoor patio at Thai Bistro when the performance was not to my liking. I feel bad that they lost my business because of something that was out of their control, but I wasn't willing to suffer through the meal. —CovertProfessor

2009-06-05 05:21:19   There's radio music (92.5?) blaring from the speakers above Baskin Robbins. When did that start? It's so disturbing that I can't believe anyone chose to start it. I was sitting in the plaza early this week (8:30 a.m.) waiting for someone, and it was on even though none of the adjacent businesses were open. Maybe someone piped it in and forgot it, but it seems strange to use a radio station. Having radio ads and dj banter is really odd in an otherwise really pleasant outdoor space. —robinlaughlin

2010-07-28 14:42:02   This plaza could and be so much more. The paid parking lot is never more that 1/3 full during the revenue generation times (when payment is required), and looks like a empty used car lot. Considering this is the heart of Davis, you would think the City would strive to improve this. An obvious solution would be to remove around 40% of the parking and replace it with a lawn, benches and a center fountain (a real fountain)- creating a smaller version of the Healdsburg center square. It would not be expensive and would add so much to the center of town. —JonFenske