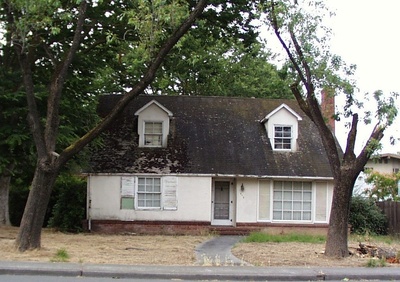 The East Eighth Abandoned House was a spooky house at 516 E 8th St. It is a giant two floor old school house style building with a garage attached to it. At least until 2005 the house was filled with garbage in every room and lots and lots of dust. During this time, although mysteriously abandoned, the lawn managed to be mowed every few weeks and The Davis Enterprise delivered. During 2007 there has been a lot of improvement and activity.

Listed as one of the Spooky Places in Davis, the house was once filled with roaches. One occupant claims to have sat at his computer and seen 8 roaches come out of an electrical socket all at once! While this has now been taken care of, another spooky aspect of the house includes a stain from a dead cat underneath the carpet. When people came to clean out the house they found a dead cat just lying in the hallway, long decomposed and stuck to the floor. The floors and ventilation shafts were filled with rat feces, and it took a year to rid the house of the rodents which were hiding in the attic, walls, and crawlspaces.

In addition, the house's walls were stained blood-red. The attic, basement, and large shed in the giant backyard further add to the ominous feeling of the property.

The residents now have a mannequin better known as the "house gargoyle". It is known to scare people, including one resident who was startled when they bumped into the mannequin one night in the darkness. 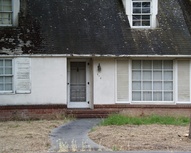 The front door with 516 as the address

Does anyone know how to check the ownership/status of a building with the city? - ArlenAbraham

If you call the County Assessor's office in Woodland, and give them the parcel number, they can tell you who owns it. —ss

"My mom, a realtor, called the owner about a year ago and was told that they were not interested in talking about the house, nor selling it. Seems sad to me! The house is in need of some TLC! It would be cute all fixed up!" KaliSlusser

2008-03-06 16:20:57   The house is inhabited as of Spring '07. The nephew or perhaps son of the deceased owners has decided to rent it out. The trees in the front are gone and it looks quite different.—NoraCary

2008-05-07 02:55:42   The previous owners died from an electric shock due to a faulty outlet and a water leak. Every July there are rumors of lightning-like flashes coming from windows, and people walking on the sidewalk have reported static-electric shocks. —WilliamBeamish