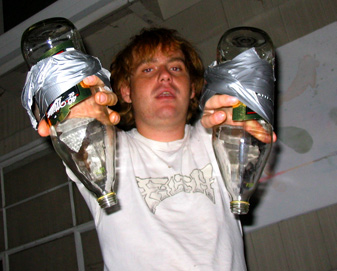 This (pictured) was one of the most amusing evenings I have had at 720. - DanMasiel

Edward 40 Hands — named after the movie, Edward Scissorhands where the main character has scissors in place of hands — is a drinking game in which contestants duct tape forties to their hands. The forties can only be removed when the contestant finishes both forties. Having their hands duct taped to the forties forces the contestants to finish their beer before engaging in other activities such as peeing.

Contestants should bring their own forties rather than relying on free beer. After all, picking your very own awful, cheap forties is a part of the fun.

There is typically a winner - the contestant who finishes his or her forties first, but rushing through the game is not recommended because 80oz is a lot of beer. The game can be played in a more friendly, safe manner, by encouraging just simple fun and no rush.

I just wanted to thank Zebraun for showing me this game about two years back. So many great nights have been had with Edward 40 Hands. - LoganChampion

The last time I witnessed one of these I brought cheese and wine...and then I kicked Tim in the face with my galoshes because he was surfing down the stairs. - JenndelaVega

Is there a hall of shame or something for the people who peed in their pants? —CarlMcCabe

Usually someone else 'helps them out' in that department..

A note to anyone who plans on trying this: loosely wrap the tape around your hands, then press it down to make it stick. My friends and I wrapped our hands tightly in tape, and it felt like we had no circulation going the whole time. Also, when it came time to remove the tape, it felt like it was removing our fingernails with it. - JoePomidor