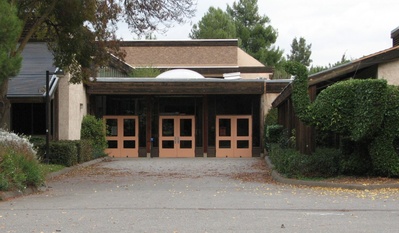 Elephant Topiary visible to the right.

Emerson Junior High School is one of 3 local Junior High schools. They integrate English and Spanish into the curriculum, producing bi-lingual children. The school opened in 1980.

Since fall of 2009, Emerson JH campus has also housed grades 7-9 of the Da Vinci Charter Academy. This responded to some declining demographics in the Emerson attendance area, and to growing interest in the Da Vinci HS, currently housed at the old campus of Valley Oak Elementary.

Notice the elephant shaped bush at the entrance to the school. It also has a large student-produced mural on the side of its gymnasium. Over 200 students worked on it at one time or another. Both works of art seem to generally withstand graffiti and vandalism which is something to note. The mural was graffitied in 2005

Near the end of the school year 7th and 8th graders have a Day on the Green when the 9th graders go on the 9th grade trip. Due to the design of the campus it is the site for Grad Night, celebrating graduates can effectively be "locked in" for the night. 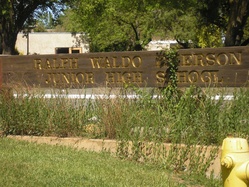 2011-08-05 16:09:16   Good old Emerson. We used to call it "Emerson State Penitentiary", since unlike the High School (and every other school in town), they effectively locked up the school after hours. We snuck in anyway of course, and got caught... ended up picking up trash at lunch for a week (good old Mr. Gary, Vice Principal). We also though we were cool because we had a pool (which has since been filled with sand? Beach volleyball I guess). The pool at Arroyo park effectively replaced this one, but back in the day we used to be able to do some water sports in P.E. classes. Also, one more memory that stands out: Last day of school every year, everyone in the school would take each and every piece of paper in their locker, backpack, etc. -and I mean every piece, out of every binder, every notebook, EVERYTHING- and toss it into the air. By the time we all left, the ground was covered in what must have been 3 inches deep of paper, in almost every hall way. The janitors must have really hated us, but it was a very liberating thing for a 13 year old kid to do. —OldDavis73