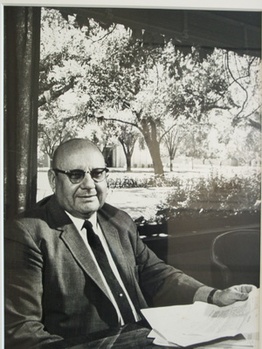 Emil M. Mrak was the second Chancellor of UC Davis and has Mrak Hall named in his honor. Emil Mrak is the quintessential Chancellor of UC Davis, having served from shortly after the University Farm era to a campus with a College of Engineering, a large College of Letters and Science, and a bicycle culture. He was born in 1901, grew up on a farm outside of the small town of San Jose, CA. His family was not wealthy, and his one luxury was a skinny-tired racing bike, which he would use to ride all over the valley and over the mountains to Santa Cruz.

After several degrees at what is now UC Berkeley, Mrak was hired on as a food science professor. His early work involved the preservation of prunes; during World War II, and for a few years after, he worked to improve military rations. In about 1950, the department was moved to the farm campus in Davis. Prior to being named Chancellor, Mrak served as the Chairman of the Food Technology Department. In his later research work, Mrak investigated global food and nutrition issues.

In 1959, the University Farm in Davis became a separate university unit, the University of California, Davis, (or UC Davis for short) and Emil Mrak began his service as the second chancellor on June 1.

As chancellor, Mrak was known for having good relations with the student body, successfully funding development of campus, and presiding over a ten-year period where the student body grew from 2,000 to 12,000.

Mrak is less well-known for his contribution to bicycling in Davis. In 1961, he instructed his planners to build a "bicycle-riding, tree-lined campus". The 1963 LRDP called for radical improvements to be made to the bicycle infrastructure, making it extremely easy to ride around campus, with separate paths for bikes and pedestrians, and an elimination of cars. Where bike routes crossed streets, they would go over or under the traffic, making life pleasant and easy for bicyclists in times of rain, heat, or heavy traffic.

In 1962, the yeast Hansenula mrakii was named in his honor. He's also got the yeasts Williopsis mrakii and Zygosaccharomyces mrakii named after him.