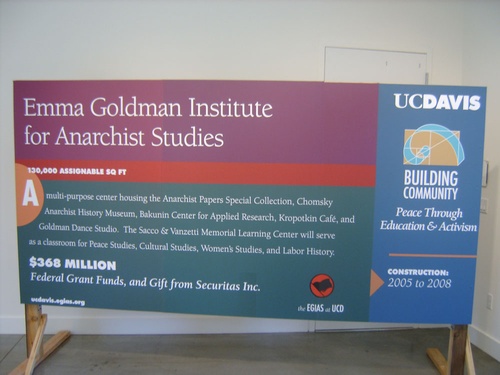 The Emma Goldman Institute for Anarchist Studies is an art project started by UC Davis Masters of Fine Arts student Steve Lambert. The piece of art that bears the title Emma Goldman Institute for Anarchist Studies is a sign mimicking the design of the university construction signs. It is ten feet by seven feet and made of wood, inkjet, and vinyl. It was on display at the Pence Gallery in June of 2005. The sign was also spotted on the Art Building's lawn on May 27th, 2005, where it sat next to some ongoing construction. It was most recently seen on the grass by Environmental Horticulture on September 27th, 2005. A good crowd of people were stopping to read it - and presumably trying to decide if it is real or not. It is a real sign, no doubt.

Steve Lambert (Art), while engaged in activities related to his “Anti-Advertising Agency” in San Francisco, installed a sign announcing the planned construction of the Emma Goldman Institute of Anarchist Studies in a field south of the Arboretum in the fall. 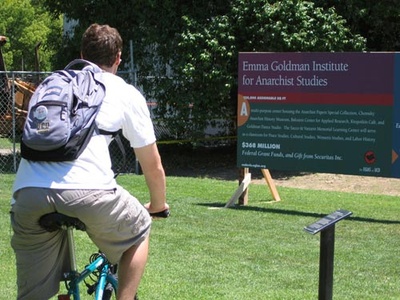 2005-11-08 02:09:58   I was bikeriding to the Mondavi Center and when I saw this sign, I freaked out. First, I was really curious about why UC Davis would dedicate a whole institute to the study of anarchy, and second, this is a government funded institute- so anarchy studies seem terribly ironic. Also, myself and a friend of mine were talking about Emma Goldman, so the sign definitely caught my attention. And when I heard from a friend that the sign was fake, that it was set up by an art student, I thought, "Kudos to him!" That's a damn awesome sign. It sure as hell fooled me!!! —ArielaHaro

2005-11-08 19:40:48   When I saw it I thought "Damn good idea!" (though the cost seemed high by 100x). Historically there was a major Jewish Anarchist movement, they had their own schools even. I saw a documentary on it. It is more appropriate than you might think... —SteveDavison

2005-11-19 15:59:16   Hilarious. I'm pleasantly surprised that The Man hasn't taken action against the posting of this sign - maybe free speech is making a comeback. —GrahamFreeman

2006-01-24 23:47:15   By all means, feel free to make your own Anarchist Institute at UC Davis. You certainly don't need a multi-million dollar building or offficial approval to get something started. Do it yourself! Step one, team up with the Anarchist Reading Group. —SteveLambert

I think that was the joke—TobinJones

2007-03-01 21:17:41   Actually, San Francisco City College houses the lagest Anarchist Library around, from what I remember. —KennethSime

2007-07-22 20:49:13   Kenneth, UC Davis has an Anarchist Papers Special Collection in the library. UC Berkeley is home of the Emma Goldman Papers Project. Not sure about SF State... —slambert