Emmanuel Diaz-Ordaz is a current ASUCD Senator. He was elected in the Fall 2010 ASUCD Election as an independent. 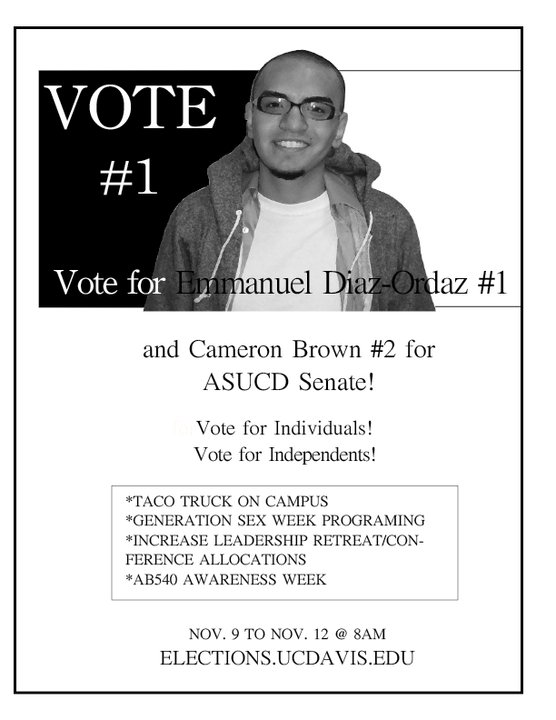 Hello beautiful Aggies!! My name is Emmanuel Diaz-Ordaz and I am running for ASUCD Senate!!! (vote for me :])

In case you've never voted in an ASUCD election before (and that's most of the student body) here's a little bit of info—there are twelve seats in the ASUCD Senate, and six of them are up for election this quarter! Because ASUCD elections use choice voting, where you RANK the candidates instead of just picking one, just ...remember to vote Emmanuel Diaz-Ordaz #1 and Cameron Brown #2!!

Campaign Platform ***AB540 AWARENESS WEEK A weeklong event dedicated to the issues around AB540, and undocumented students ending with a scholarship giveaway open to all students.

***TACO TRUCK ON CAMPUS In collaboration with the Retention Coordinator for Yik’al Kuyum at the Student Recruitment & Retention Center, I want to bring a Taco Truck to campus at least twice a month during La Raza Tuesdays.

***INCREASE LEADERSHIP RETREAT/CONFERENCE ALLOCATION As of now, some money is being allocated to certain leadership retreats on campus. However, it is not nearly enough. There needs to be more institutionalized money for these very crucial community building, ally developing retreats and conferences in order for us to learn from each other and other UC’s to make our own campus a safer space for all communities.

Short and Simple, mostly. If you have any questions, ask me :]