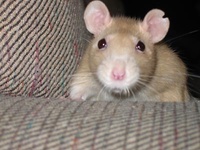 This is her mugshot

Endora used to be called Enduro when she belonged to someone else, but her new owners didn't have an extreme interest in rock climbing, so they renamed her. She lives with the Z twins: Sharon and Amy. And Davis Coeds Scotty too. Seeing as Endora was adopted from Sharon's old roommate Vineta she belongs to Sharon.

After Endora's sister Delores passed away in November of 2004 and after Po passed away in March of 2005 Sharon and Amy decided that they would share Endora. Endora got a new roommate named Petunia in April.