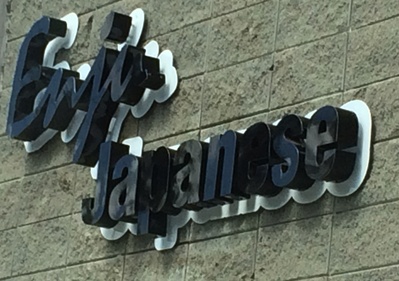 Enju is a sushi restaurant that just opened! the special rolls on the tasting menu are currently 50% during the grand opening. It offers traditional Japanese food with a fusion influence. The menu includes sushi rolls, sashimi, noodle bowls, tempura and bento boxes. They also offer an "all you can eat" sushi menu option.

They have a particularly creative (not to mention tasty!) set of vegetarian rolls.

Hoa Viet was formerly at this location.

As always on the wiki, click to view full size 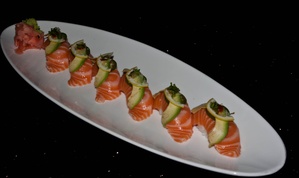 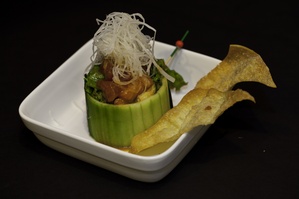 2014-10-10 23:41:10   We've had a couple of meals here and are very pleased so far. The quality of the ingredients is really high and the food is flavorful. They also offer more vegetarian options than your typical American-Japanese restaurant — see especially their veggie rolls, which are creative and really, really good. Damn, now I am hungry. —CovertProfessor

2014-10-23 10:20:58   Went here for their AYCE sushi dinner and was terribly disappointed. I sat at the sushi bar and ordered from the chef directly. The fish to rice ratio on the rolls was ridiculous. Fish was sliced paper thin and accompanied by a largest wad of rice I'd ever seen on sushi. Chefs were inexperienced and the rolls were very messy and fell apart. I also question the cleanliness of this place. The sushi chef had a small soup bowl filled with water that he kept using to wet his hands (so that the rice wouldn't stick to his fingers), and I don't believe the water was changed the whole hour that I was there. Also, the chef used the same rag to wipe down the work surface the entire time I was there—I did not see it changed at all. And on top of all this, I only saw him wash his hands once... ick.

My date ordered a bento box with tonkatsu and sesame chicken. The pork and chicken were both tasteless and fried very poorly, and the breading was falling off of the meat. Overall, we were both disappointed and don't plan on ever returning. There are better Japanese restaurant options in Davis. —MargaretWong

2014-12-11 22:04:49   I've been here twice now, purchasing the lunch buffet option both times. Service was quick, staff was attentive, and the sushi quality was very good. It definitely beats out Fujis and Davis Sushi when it comes to the ayce option. That's the general consensus among the friends I dined w/ as well. —RyanMeyerhoff

2014-12-14 17:26:05   I tried out Enju's delivery and despite a few snafus I am VERY PLEASED. The tempura is excellent, DELICIOUS and so is the rice. Avoid the sunomo salad which was literally .50 cents of cucumber slices in weak vinegar with two ebi shrimps for 7.95!!! Sunomo salad at that price ( I was told it was a "medium portion") should be a good amount of chopped cucumber marinated and have a crisp flavour, Enju's does not. It was a complete joke for the price. The special rolls like Popeye and grasshopper (I asked for no sauce which they got right but then they also left off the fish roe) are great but on the smaller side. My teryaki salmon was great and they dealt with a large order and a lengthy delay in finding our place, professionally and calmly. Despite the long delay the food was still warm and very edible with great tempura sauce. Soda cans are 1.75. Many vegetarian options. I'm looking forward to the buffet options which is always much more affordable at any Japanese restaurant than a straight order. I am VERY happy you can now get Japanese food delivered in Davis and I look forward to ordering again now that I've tested the waters. Starting out any restaurant is challenging and I and happy that Enju is jumping into the ring with the half dozen other Japanese restaurants in Davis.