Snapshots from the Battlefield 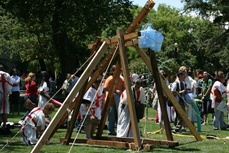 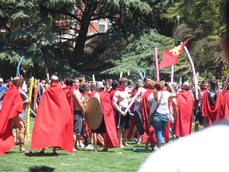 Of course there were spartans. 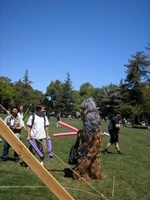 A wookie comes to feed on the slain. 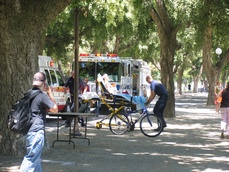 a fallen warrior leaves the battlefield. 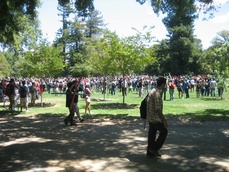 "Many had fallen...the spirit of the great foam armies had waned, and now none stood to defy the sinister grip of meaningful purpose.

But even as the evil forces prepared midterms and small, two to three person discussion groups, warriors assembled. They clandestinely prepared the resistance, forging their weapons in cold foam.

Once again, the war cry enveloped the land, and all will regale their friends with the glories of the EPIC QUAD BATTLE!!" - modified from text in the Facebook event

2007-06-06 15:52:09   I've missed the Epic Quad Battle every year (I'm usually in a frantic state of writing papers / studying by then). Next year I might just come up just for the battle! If some other people want to seriously build a water-balloon firing trebuchet I am totally down to be part of the trebuchet team! —KrisFricke

Yeah, the police and a fire truck were at the quad when I got there. Someone told me that a guy had been hit in the head with something that made him bleed a lot and an ambulance came. —ArlenAbraham

2007-06-07 11:07:54   Yeah, I heard from participants that at one point both sides joined forces and rushed the bystanders. —CarlosOverstreet