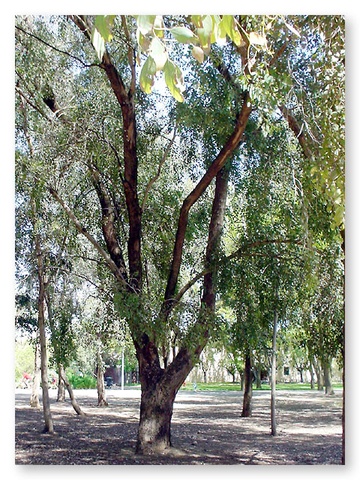 UC Davis has at least one eucalyptus grove on campus, near the Mann Laboratory.

Eucalyptus or gum trees are any of numerous tall trees within the genus Eucalyptus. Although thought to be mostly native to Australia, only two species are not found in Australia! The term "eucalypt" actually includes the closely related Angophora and Corymbia genera as well; the Eucalyptus genus is distinguished from these by both an alternating leaf pattern and flowers with an operculum/cap that falls off as the flower blossoms. Eucalyptus' are most easily identified by their smell, soft blue-green leaf color and smooth, constantly shedding bark; their leathery sickle-shaped adult leaves yield an oil that is valued medicinally. Interestingly, at least to those of us who aren't Aussies, the Coolibah tree mentioned in Waltzing Mathilda is a species of Eucalyptus. It is also somewhat interesting to learn that the first record of the eucalyptus tree appeared in Abel Tasman's journal in 1642; at the island of Tasmania a reconnaissance party reported back that they had, " seen two trees about 2 1/2 fathoms in thickness, and they measured from 60-65 ft. from the ground to the lower branches " They were intrigued by the gum secreted by the trees. It was during the gold rush that the eucalyptus was introduced into California as new immigrants began to cut down our precious stands of pine, oak, & redwood leaving mostly scrub bushes. As easterners and immigrants from other lands, they were also unused to seeing largely treeless landscapes and referred to California as barren. Fast-growing eucalyptus' stepped in to fill the void and quickly became popular for their shade, beauty and the quality of their wood. Professor Woodbridge Metcalf, one time forester for UC Berkeley and an expert on California eucalyptus, posited that the first eucalyptus in California appeared at Oakland's Shellmound Nurseries and Fruit Gardens in 1856.

The eucalyptus belongs to the Myrtaceae family; within the genus there are estimated over 600 species — because eucalypts within a grove grow so closely to each other, the genus is constantly growing with many cross-species hybrids. It grows in a variety of shapes and sizes, as well as climates ranging from desert, swampland and valleys to alpine regions; this rapidly growing evergreen aggressively demands any sunlight or moisture within its purvey. For most species, however, warm summers, temperate winters, moderate rainfall, dry atmosphere, and plenty of sunlight make for an ideal climate — in short, coastal California and other areas where citrus and olive trees find success.

Eucalyptus flowers typically vary from white, cream, pink, yellow, or red depending upon the species. The flower petals and stamens are fused into a cap called an operculum — as the flower opens the cap is shed. After flowering, hard, woody seed pods develop and are often key to identifying the plant species. Typically, these seed heads remain on the tree until released by fire or the plant's death.

These trees, counted among the giants of the arborial world, require a strong taproot drilling down at least six feet for security and aggressive lateral roots spreading about a hundred feet to support its size. Because of this extensive root system as well as its propensity to resprout quickly following environmental damage or cutting, eucalypts can be considered invasive and difficult to eradicate — but these qualities also make it an excellent windbreak tree. Eucalypts are best propagated from seed, explaining the virtual lack of disease within the genus.

In Davis soil the tap root doesn't always penetrate enough if planted above clay. When this happens the tree grows up and then is subject to the winds. Take care where you plant these if you are landscaping a yard.

Medicinally, the eucalyptus actually helps prevent malaria is one sense, because it absorbs such large amounts of water that it effectively drains swampy areas, destroying mosquito habitats; as far back as the 1870s, Sacramento County was identified as a pocket of malarial fever and eucalyptus' were planted to help stem the tide. The plant's straight, hard wood, valued as a lumber source, varies among species from white to dark brown and is used as a more sustainable alternative to teak. Eucalypt oil, a strong antiseptic, has been used in medicine, industry and for perfumes, while the flowers of many species are important in beekeeping.

Much of this information was culled from The Eucalyptus of California as well as The Eucalypt Page. For a listing of other plants found growing in Davis, visit our Town Flora.