Sometimes, well, sometimes things explode and catch on fire — right here in Davis! These aren't the only disasters, as there are power outages and falling things from time to time as well. 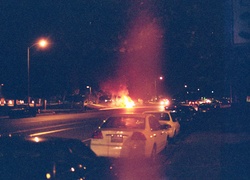 At about 11:20PM on Monday May 2nd, 2005, a car fairly randomly exploded outside of IHOP on Cowell Blvd.. I was there, and it was entirely stationary. No one was in the car, and a little fire started on its left tire. The fire spread to the rest of the car, and the whole thing exploded. No one was harmed and the Fire Department responded immediately. 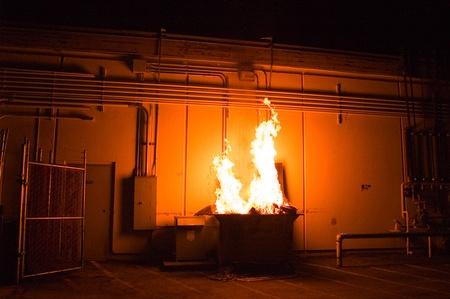 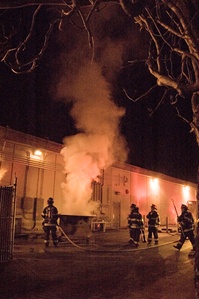 At 10:45 PM on March 21, 2006 a dumpster in the alleyway behind the U Mall was on fire. Interestingly, and likely unrelated, a few weeks prior to this there was an oil spill right next to this dumpster (caused by the trash compactor).

I was walking by and I saw a small fire so I called the fire department. They arrived about 4 minutes later, after it had spread to the entire dumpster and onto the wall. As I was leaving I noticed a bottle of lighter fluid about 100 feet away. — AmyZimmerman

It got listed as arson in case 06-1567. Unknown juvenile started a fire in a dumpster causing $1000 in damages.

In the morning of 17 January 2013, there was an explosion in an apartment in the Russell Park housing complex on campus. Police evacuated the building. That evening there were a series of controlled explosions as the Davis PD blew up some "chemicals" found in a researcher's apartment. On the 19th, UC Davis police arrested David Snyder, 32, in connection with the original explosion. He was arrested on felony counts of possessing an explosive, possessing materials with the intent to make a destructive device, and possessing firearms on campus. More info here.

The police set off more explosions stemming from the incident between 6 PM and 8 PM on 24 January 2012.