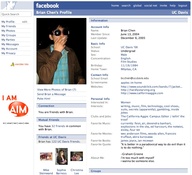 Similar to Friendster.com, DavisCoeds.com, and other social networking websites, Facebook started up in February 2004. By the time students returned to UC Davis that September, the site was already part of the culture. The name was originally "The Facebook," but they changed their domain and logos to all read simply "Facebook" in the Fall of 2005. As of September 29th, 2007 there are 38,918 people on the UC Davis Facebook network. Facebook is commonly referred to as Stalkerbook, due to its many features that allows you to track people in your network, especially when you are friends with those people.

Facebook launched as a four-year university-only service initially, allowing only those with valid university-related email addresses to sign up. This university-specific email catch proved successful, and the site was able to undergo tremendous but controlled growth. Progressively the Facebook began adding 2-year colleges and community colleges. In 2005 High Schoolers were allowed to sign up for the site, but because of concerns regarding polluting the college-specific nature of the site they were not allowed to communicate or be seen by the college users. On February 27, 2006 Facebook dropped this restriction, and High Schoolers and College Students can now interact. On September 11, 2006 Facebook announced they would soon be opening up Facebook registration to anyone, not just College and High School students. This change went through on September 26th, 2006, and now anyone can use the Facebook service.

On September 5, 2006 Facebook altered the default logged-in screen to be the "News Feed," a new feature that lists every action that every Facebook friend of yours makes on Facebook. The News Feed feature received widespread negative reactions from Facebook users, but initially Mark Zuckerberg stood by it and asked users to give it a chance. Hundreds of groups opposing the change were formed, the largest of which reached well over 50,000 people within the day, and 750,000 members by the third. On September 8, 2006, three days after the launch of the news feed, Zuckerberg apologized and said new privacy settings were being added to the News Feed. Most notably, bits and pieces of personal information can be removed from the news feed ("Publish stories when I…"), and some of the information such as relationship status changes and group joining are by default no longer included in the feed. However, many users are still not impressed with the whole feeds thing and the redesign that accompanied the feature. The privacy update killed the part of a person's profile where they could list the courses they were taking.

You've got to be kidding me.

November of 2007 brought what is possibly their most grievous invasion of privacy yet! With a fresh inflated valuation and associated investment from Microsoft, Facebook began to face pressures to increase their advertising effectiveness. Their solution: "Beacon Ads": companies pay Facebook and when you take unrelated actions on these companies' websites they send data, without your permission, to Facebook. Facebook then displays this information for the world to see. As an example, if you purchased a movie ticket from Fandango.com while logged into Facebook, you'd have the purchase information forwarded to Facebook. Some time during your "check out" on the unrelated site you would see a message about opting out of the "news feed" display. Regardless of whether or not you agree to having the data displayed in the "news feed", Facebook still retains your purchase data (lord knows what they'll do with it years down the line). There is no global "opt-out" of the new "social ads" system — you can only opt-out of individual transactions being displayed on the "news feed" as they occur. "Opting out" is often pretty hard, as this demonstration from MoveOn shows.

The new "Beacon Ads" are possibly illegal in some states because they amount to endorsement of products and services without meaningful consent. The group MoveOn is protesting the Beacon Ads.

Some popular features include:

Facebook is developed in a combination of programing languages, but was originally primarily written in PHP. The Facebook code base includes programs written in PHP, C, C++, Perl, python, Java, and ML.

Facebook has been growing more and more crappy in terms of ads and such. Tired of "sponsored stories"? Tired of their stupid "web search" showing up when you don't want it to? Put this in your CSS file for the site (e.g. Stylish, if using Firefox) and make it all go away!