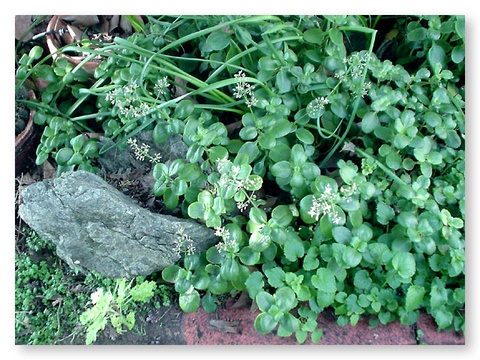 This Fairy is growing extremely well in a deep shade location alongside campanula.

Fairy flowers rising above some oxalis.

Once spent, the flowers turn into little Fairies!

Fairy Crassula (Crassula multicava) is also known as Pitted Crassula, Mosquito Flower, London Pride, and Cape Province Pygmyweed. It is a South African succulent perennial named in 1862, and is one of the more common Crassula species in cultivation. Crassula is a large genus containing many species, including the popular Jade Plant (Crassula ovata), native to many parts of the globe with cultivated varieties almost exclusively from the Eastern Cape of South Africa. Crassula leaves are always borne in opposite pairs and the genus name is from the Latin diminutive of crassus, thick, in reference to the plump leaves of many members of the genus.

Fairy Crassula foliage is pale green, hairless, odorless and succulent. Each leaf measures at most an inch and a half long, is dull, looking pitted like the surface of an orange peel; it is untoothed, but notched a bit at the apex; the short-stemmed leaf base clasps the plant stem. The loosely clustered flowers are delicate, created from four slender petals that are dark pink outside and pale pink or white inside — these flowers are petite, charming little stars. To propagate itself the plant sends down roots from its stems or drops small self-rooting leaves that appear after flowering. In Davis, Fairy Crassula does equally well in sun or deep shade, enduring regular drought beneath shallow-rooted trees, and survives our occasional freezing nights without damage. Most Crassula tolerate some small degree of frost, but extremes of cold or heat will cause them to lose foliage and die. The flower essence of Fairy Crassula is said to be useful in treating "excessive use of the will; unthinking devotion to a cause; inability to understand any other point of view; negative ego." Such a treatment can be most useful should it really work.