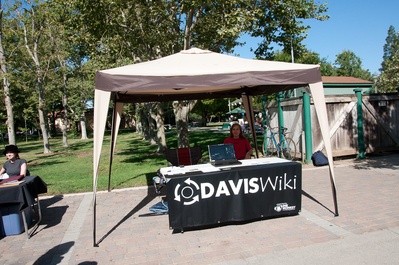 Come join us! Currently, no one is tabling for the Wiki. If you're interested in representing, find out who currently has the tabling equipment, pick it up, and make it happen!

The Wiki had a table at the Farmers Market for most of the summer. You can learn more about Local Wiki and the Summer 2010 pledge drive, as well as the Events that were held. We've got a canopy, a table, some chairs, and a nifty banner. Some work was done on flyers, which are still available.

What do we need?

Flyers are at Wiki Pledge Drive 2010/Flyers - print some out & hand them out! Also add to Wiki Community/Outreach and Wikivangelists. Plan more specifically to the campaign at Pledge drive planning.

While we'd prefer people to use Kickstarter to make their donations, some people insist on giving us cash. Do we want to put these donations into Kickstarter somehow (create a Davis Farmers Market donations account) or simply deposit them in the Wiki Spot bank account?

Also, there is the problem of not appearing to be shady. We must have a proper container to store the money rather than just pocketing it. We used a glass jar, and it helped. Two people should count the money at the end and post the total to the wiki to be sure none of it disappears. It has been suggested that we give receipts for cash donations, but is it really worth it when the average donation is $1-2?

For minimal shadiness, how about keeping a cash donation log on a clipboard? Sounds good!

2010-06-25 16:25:22   If at all possible, please collect donations via Kickstarter instead of cash/check. It's more accountable, involves less administrative overhead, and has a much greater impact than cash/check donations. —Graham.Freeman

I just want a cash box so if people insist on donating right then and there, I have a place to put the money instead of just pocketing it. —WilliamLewis

You're the one doing the tabling work, so your call, but I'd suggest not accepting cash/check donations at all. If it were me, I'd politely decline any such offers and instead point them to the DavisWiki/LocalWiki site to donate. -Graham

My battery is pretty much dead. Oy. —wl

2010-06-25 16:53:17   WL: for the flyer, I would suggest highlighting daviswiki a bit more. Throw the logo on there or something, since that's what davisites tend to relate to. —TomGarberson

Exactly, it needs to be shorter and more relevant to Davis. I can help with this tonight. —MikeIvanov

Agree with this. The new software in particular will benefit Davisites and make it easier to get more members of the community involved. —CovertProfessor

2010-06-25 16:57:37   Also, as a general rule, people are going to be leery of things involving money and a totally random URL. IMO send them to LocalWiki first (or, better yet, daviswiki.org/donate or something like that), and use a link there to the kick.st page. —TomGarberson

Better yet, tell them to go to http://daviswiki.org and click the giant pledge link at the top of the screen :) —PhilipNeustrom

Even if you don't have a tethering setup, a laptop or two just to play back the video would be helpful! —WilliamLewis

If it keeps the sun off people, I say that's a good thing. =) —WilliamLewis

Ok. I'll do that if Bike Forth isn't using it. Maybe I'll table for Bike Forth (and daviswiki/localwiki) and we can share the tent! That would be fun. —Angel.York

Ditto the Bike Forth + Wiki tabling; the canopy sounds like a good idea. I've got a laptop with a fairly good battery and a cellphone that can do tethering. —DarinWick

That would be great! —wl

At market with canopy, etc. No sign or table. Will be here until done shopping. —DarinWick

2010-06-28 19:20:05   Anybody interested in approaching Screaming Squeegie, Ink Monkey or somebody to do a nice vinyl sign for Davis Wiki with their logo in the corner saying "Sign donated by..."? If we are tabling regularly, it's win-win. (Verify it's okay with the Market, but it's very common) —JabberWokky

2010-06-28 19:47:29   As a potential alternative to a laptop battery (or, more likely, to supplement it), if anybody has a jump starter or is interested in getting one, a decent Black and Decker jump starter has standard outlets and laptops can plug into it. The capacity varies wildly depending on the brand and model, but it's basically a "bucket of electricity" you can put under the table. —JabberWokky

Yes, but me and Darin thought a daviswiki regular was going to turn up with a sign and table. Guess next time we should plan on being self-supporting? —["Users/"Angel.York"]

There was an unfortunate snafu— William thought he'd be out there on Wednesday but ended up having to do a radio interview. I would just make sure and check this page (at the top) to see if someone's signed up to be there before heading out. Or just go it alone :) —PhilipNeustrom

Great! Do you have access to a table and canopy? —WilliamLewis

We really need to get out there on Saturday!

How much are simple tables? Can someone research how much a canopy is, too? —PhilipNeustrom

2010-07-17 14:32:55   So our second farmers market tabling went awesomely! In addition to myself, KBathory and NickSchmalenberger came out and promoted Davis Wiki and Local Wiki. We got $5 in donations this time, but I convinced a lot of people to hang on to their cash and donate online. We had the local wiki video running on KBathory's laptop, running off of an extension cord. We had a canopy this time around, which made things much more bearable than before. We finally got to unfurl our awesome new sign, courtesy of Ink Monkey Graphics.

We had several people from out of town tell us about how they wish they had decent wikis. I directed them to localwiki.org and told them to submit their communities for consideration. We also had people who run events/organizations like the Davis Film Festival ask about how they could improve the pages for their events/organizations. I told them about how our new software is going to make things easier. —WilliamLewis

2010-07-18 07:50:13   Good times. I'll see about my work schedule for this coming week. I should know by tonight (and each sunday night following) if I'm able to table. I have a car, laptop, and cord. I can also see about making some sort of shnazzy sign with my poster board and sharpie skills, but that's about the extent of my ability. —KBathory

2010-07-19 16:40:00   It might make sense to ask the Enterprise to put an announcement about the tabling under their "Briefly" columns. I don't know if they charge for those announcements, but I've seen similar announcements about other groups with tables at the Farmers' Market. It might help to draw attention to the table and to the cause in general. —CovertProfessor

2010-07-24 18:05:23   Another wonderful day at the farmers market! We had plenty of out-of-towners interested in the LocalWiki project... and by out-of-towners, I mean like people from Boulder and Boston. We also had quite a few business owners stop by and thank us for all the referrals. One business owner said 50% of her new customers found her through the wiki! We were also approached by many people wondering how they could put stuff about their activities on the wiki.

On the donations front, we got $20 in cash (some guy just gave us a 20). Lots of people said they'd donate... we even gave away a button on the condition that the recipient donate. We really need to have a laptop there with internet so people can donate online there, which might happen next week (I potentially have a cellular modem).

Kurt Vaughn and I are interested in organizing a pair of fundraiser dance parties for LocalWiki, one at the Domes and one potentially at DoV. Is anyone interested in this? Email me at dch miller at uc davis dot edu, we can plot further with a reply-all email thread. —Darach

In other news, I can table for part of Saturday market later in the day if someone brings tabling stuff. —Angel.York

2010-08-22 03:54:23   I can help out for any amount of time on Wednesday the 25th and my laptop has excellent battery life. Who do I contact to work this all out and do we need anything else that I might be able to bring? —RachelPeters

2010-08-26 02:30:15   So it turns out we *do* have wifi, or at least I did where I was (the very last stall space still under the permanent canopy thing). There were two insta-connect signals and insta-connect allows hotspot use for free as long as you hand over your personal info (name, address, and e-mail). So I got to let people browse our wiki on my laptop and showed the kickstarter page. Many didn't seem to be too interested in donating but a great deal were interested in the fundraiser events so I concentrated on pushing those (will those proceeds go to the kickstarter site?). I'll be there next Wednesday as well. —RachelPeters

The proceeds from the auction & sophia's night will go into the kickstarter totals, though we may have to hand off the money to someone and have them pledge that amount (due to annoyances involving the amazon payment system). At least for the auction, one plan was to have people commit, on paper, to the item — and then we'd follow up with them via email/phone to ensure they'd made the pledge online — I think this is how most auctions work, so it's not too big a difference.

Thanks for being out there today!! —PhilipNeustrom