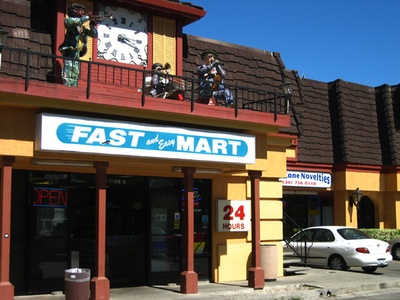 A 24-hour convenience store selling snacks, drinks, periodicals (including pornography), etc. During the summer, their chocolate candy bars are all mushy or melted. They carry the World Journal Chinese newspaper.

It is an excellent location for smokers - any time, day or night, you can walk in and get various cigarettes, including hard-to-find Camel Turkish Jades and several flavors of Nat Shermans. It is especially convenient when running out of cigarettes while bar-hopping.

During May of 2006 it was noticed that the payphone was no longer there.

There is another Fast and Easy Mart located at the intersection of Richards Blvd. and Research Park Drive.

Does this place have sandwiches? —SS

A.K.A. "Slow and Hard" —TysonNichols

I urge a boycott of this place on account of high prices, poor soft drink variety, melted candy, and uncomfortably hot indoor temperature [and because the stingy owner/operators would rather save money sweltering in a stifling hot store rather than turn on the air conditioning like any normal business]. —RickEle

2005-12-21 04:17:43   Awww ... I'm surprised no one likes this place. I go here when I'm studying on late nights. I think it probably is overpriced, but it has a much, much better selection than either the Chevron or Shell station down on Covell Blvd. Plus, there's a really nice guy who works there late nights and tries to remember the clientele that comes in (he's not that great with English). —SS

2006-01-20 18:09:09   I like this place for a couple of reasons. First, they had my favorite smokes (Nat Sherman Classics) for less than anywhere else I ever bought them. I've since quit, and GOD how I miss them! Anyway - one incident sold me on this place for ever. I was in the middle of writing papers during finals week, and I made a run down there for something caffinated and a pack of smokes at 4 A.M. I didn't realize until I got my stuff to the counter that I had forgotten my wallet at home. I asked the counter guy (probably the same really nice guy Saul mentioned) if he could hold onto my stuff while I went home to fetch my wallet. The clerk said, "It's OK, you come back tomorrow night and pay. Take with you!" I was amazed that a convenience store clerk was so kind and trusting. I came back the next night and paid, and they landed a customer for life. —BigDave

2008-03-26 22:57:30   The best thing about the Fast & Sleazy is that it's open 24/7. There are many nights when I'm up late working on something and I run out of water, soda, whatever and all I have to do is go there and pick it up. Granted, it's not the most glamorous spot and yea, it's hot and smells kinda funky a lot of the time, but, hey, it's convenience and that's what you are really paying for, right? Funny story: Several years ago I made a midnight run for chips and soda. As I was walking out towards my car, a middle-age caucasian male approached me. He didn't look shady, in fact, he sort of looked like he could be a professor or something. Anyway, I stopped thinking he just needed the time or whatever. But no, he asked me how much I charge. I was confused; i didn't know what he was talking about. He wanted to know much I charge for the night. That's right, he thought I was a bona fide prostitute. I scurried away without another word. I don't know how the hell he thought I was selling sex when I was wearing my UCD sweatshirt and had my hair up in a pony tail. But he did. —CurlyGirl26

2009-04-12 19:28:45   Everytime I go to this place, I end up having a bad experience (mostly as a result of poor customer service) and ask myself why I went in the first place. The owners are usually condescending and in a hurry to get you out, and their items are over-priced. If you can help it, go somewhere else for your needs. —NavidZamani

2009-06-24 18:09:49   I didn't like this place. The first time I went to buy a drink, I didn't see the small note on the table that said "Minimum $5 for debit". So I took our my debit card. He gave me a mean look and pointed at the note. Then he mumbled something about an ATM machine. He didn't look overworked, so dude needs to chill out. —WengFF

2010-06-10 11:04:13   The guys working there are total douchebags who: (1) are always on the phone while you are purchasing things; (2)Don't even bother looking you in the eyes or saying hi; (3)just plain creepy. The only semi-decent employees are the younger ones. Also, everything is sooooooo expensive it is ridiculous. I wouldn't mind if i was overpaying for things if they just had some nicer employees, but the fact they are all extremely rude makes it that much worse!

2011-04-23 15:07:21   This used to be an AM/PM til about 1992, when supposedly they lost their business license after selling booze to an underage kid. Do they still have the note near the magazine rack saying "This is not library so do not read magazeen here"? —AlanSmithee

2012-04-09 16:07:13   DO NOT GO HERE. The people that work there are extremely inconsiderate and practically retarded, let alone how ugly they are. They care not for the customer, but rather for how much money they can get out of each purchase. For instance, I parked my car and went on campus for all of 45 minutes, come back to the parking lot and find that my car had been towed. I asked the guy and he said to basically get lost. Fuck him. Never go here. They smell and they do not attract people. NEVER GO HERE! —trevorlowenthal

2013-07-25 07:43:47   I don't normally jump on Davis Wiki to complain about a business but wow, this truly is a second rate convenience store. Incredibly overpriced (beer/wine can be up to twice as expensive as Whole Foods), hot as hell, and rude employees. Don't bother asking for specific change, even if you're buying something (when I asked for my $1.50 change in quarters, I received a sermon).

Don't waste your time or money.

2015-01-20 00:46:56   The owners and/or cashiers are disgusting people. Not only are they rude, but they are also stupid. They need to learn how to label their items to avoid customer confusion. I did not buy anything at this dump and am happy not to recommend it to others. F- would be their rating. —looloo