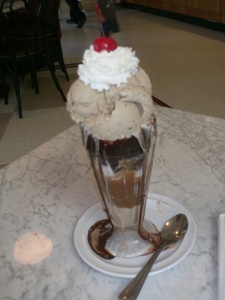 The Black and Tan: gooey bliss

Fentons Creamery, a long-established Bay Area icon, has opened a restaurant in the new Nut Tree center in Vacaville on the north side of 80. Though you can order ice cream in a cone or cup like more local establishments, Fentons' highlight is the large variety of sundaes that one must sit down and savor—or perhaps even share.

Similar ice cream parlors can be found in Sacramento, but Fentons should draw the East Bay transplants. The menu is mostly same as Oakland's, and yes: there are crab sandwiches here too. Unlike Oakland, there is more parking than you could trebuchet sticks at. Their mascot, Myrtle, looks suspiciously similar to Mooby the Golden Calf. 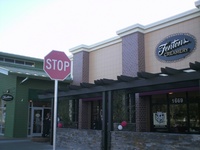 Stop and smell the crab sandwiches 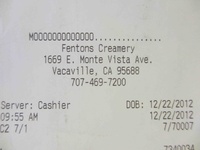 2007-09-03 18:37:44   It's an easy stop on your way back to Davis from the Bay Area (or hey, why not stop in both directions?). There's a nice outdoor patio where, on hot days, they attempt to cool you with misting water. Oh, yeah, and the ice cream was yummy. For my fellow chocolate peanut butter lovers, there's is an unusual take on the flavor, with peanuts and chocolate candies in addition to the peanut butter. Next time I'll have to check out some other flavors. Oh, and as an added bonus, there's a little store right next door with a pretty good selection of Jelly Belly products, including the elusive JBz (think flavored M & M's) — no need to stop at the Jelly Belly Factory. —CovertProfessor

2007-09-03 18:57:17   The fried chicken salad was quite good and plenty of food for $8, but I was very disappointed with the crab salad sandwich. There was only the crab salad with a piece of lettuce on toasted white bread, and I thought it was meager for $13. I would still like to try the ice cream another time. —NickSchmalenberger