Many people in and around Davis keep Honeybees for crop pollination, honey and wax production, and/or teaching purposes. However, you can find colonies of honeybees trying to make a living on their own out in the wild. Although European honeybees are semi-domesticated and there are several diseases and pests that plague their colonies, they can still survive on their own. Thus, feral colonies of bees can be used to gauge the health of bees and the evolution of resistance to those diseases. Feral bees tend to have weaker colonies than those kept by beekeepers, for a variety of environmental reasons. In Davis, the spring of 2006 was very good for swarming bees and feral colonies, which led to the founding of this page to catalogue them. Records such as these may help people make long-term estimates of bee population health, which may be crucial considering the recently discovered Colony Collapse Disorder.

How to find Feral Bees 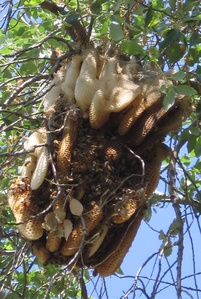 The European honeybee prefers to live in cavities. These can be holes in the sides of trees and stumps, cracks in rock outcroppings, inside of apartment walls, attics, and of course, hive boxes built for them by beekeepers. Some kinds of trees are more likely to provide suitable homes than others, for example, old olive trees tend to have gaps and holes at the base of the trunk, and walnuts can have cavities that develop inside of split trunks and places where branches have broken off. Some bee swarms that don't find a suitable cavity may build a free-hanging nest high up in a tree.

If you are looking to find feral colonies of bees then look at the crevices and holes found on the trees near where you are walking, and stop to take a look if you see anything moving. Sometimes scout bees checking out potential new homes can fool you into thinking that there's a colony in a tree - if they fly around the hole cautiously they may be scouts or "robber bees" stealing honey from a dead (or weak) colony.

If you see a clump of bees sitting on a branch or the ground in the spring, this is not a feral colony but a swarm. Call the Fire Department, the Davis Bee Wranglers or the Sacramento Beekeeping Supply and a happy beekeeper will come out to collect them.

What to do if you find one

Come back here and tell everyone about it, how to find it, and if you can, take a picture. If you can't, someone with a camera will probably go check it out. You can also call the Davis Bee Collective, Davis Bee Wranglers the City of Davis, the Fire Department, or the nearest beekeeping supply store and a beekeeper might come out to try to transfer the colony to a hive box. This process is difficult, so not every beekeeper spends the time to do it, although it is recommended that all beekeepers try at least once.

Also, when you add a colony to the list, check the archive pages below to see if that hive was populated in previous years. Add ["/2006" Established 2006] (or other appropriate year) to read: Established 2006. This should help everyone understand how long the colony has existed.

Unknown status - someone please check on these 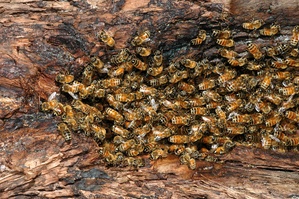 Year to year, feral colonies will wax and wane. Sometimes they swarm and spread to new places, or abscond and abandon their nests for bigger cavities. They may also dwindle and die, or get mistakenly sprayed by a human. Because of this, each year we move information about feral colonies found in Davis to archive pages.