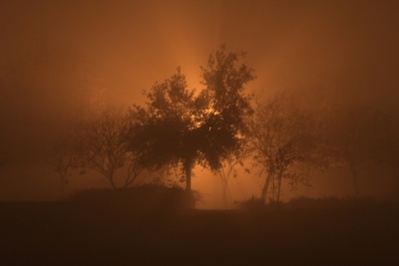 Fog at night. You can almost see the little cat feet.

In the winter, Davis becomes shrouded in fog. Not only is this beautiful, but it adds to the fun of late night lightless drunken bike riding. Fog in Central California is pretty amazing and far surpasses the fog found in the famous Fog City. It should be noted that in addition to 'normal' fog, we also get 'Tule Fog', which is a variety of fog unique to the Central Valley.

The density of local fog makes driving very dangerous and is responsible for numerous massive 100+ car pileups. The danger of the fog goes beyond simple visibility loss, as there are often patches of black ice lurking on the road. In general, if it is foggy in Davis, then it will be very bad on the freeways. The Causeway and I-5 have had particularly bad fog-related accidents in years past. The fog will tend to break up past Vacaville, but watch out for patchy fog, where you will have clear skies one moment, followed by total white oblivion the next. Drive cautiously, and nobody will think any less of you if you go below the speed limit. Do not use high-beams in fog.

In town, the fog is usually thickest in the morning which is a welcome respite to the often bone-chilling winter Weather. The fog keeps us cooler in the day, especially earlier, since it blocks the sun from heating us up. But the fog helps keep us a little warmer at night by trapping some of the days' warmth.

The Davis skies are invisible during heavy fog, but on lighter fog days, one can see blue sky above and mist ahead. Our fog is radiation fog, which forms on the ground. This is quite different than the marine layer you would find in, say, San Francisco, which is anywhere from a couple hundred to a couple of thousand feet above sea level (just below the inversion layer).

The waist high fog hovering over the many sports fields can be quite a sight to behold late at night and early in the morning especially when car headlights illuminate the misty fog.

Bearded people can experience extensive condensation while bicycling. If it's cold enough they might even get ice in their beard.

Fog on a field by the Memorial Union. 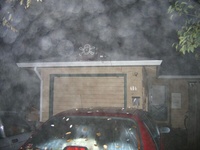 Fog at the Pirate Ship. 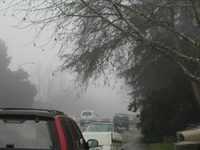 Fog at the Campus Roma.

Fog at the Davis Cemetery. 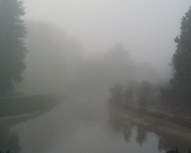 Fog in the Arboretum looking south into the west end. 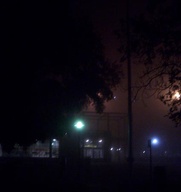 Red fog lit up late in the night in late autumn at the MU.

Fog in the small, dark hours of a December morning at the University Mall.

Rarely there is even fog during the summer, taken August 7th, 2007 looking northbound on Pole Line Road

A foggy evening at the boat launch in the Arboretum

This is an excerpt (first verse, chorus) from "Cathedral". I wrote this about my weekly drive northbound on I-5 around two to three in the morning, heading back to Davis from Stockton. It is about three things, the first two of which are the timelessness of driving through the fog and the introspection that tends to occur at that hour on the road. The third is how when the fog was right, when you approached something lit up with a tree or other object above the light source, there would be fantastic arcing beams of light spraying up and out. They evoked for me the complex internal structural beams and the rays of sunlight streaming through the windows in a medieval church. —JabberWokky