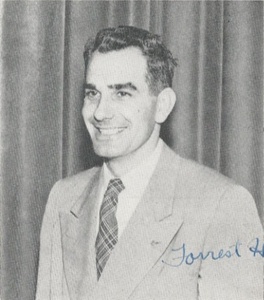 Forrest Honnold (born 8 February 1920, Stockton, California; died 6 January 2003, Carmichael, California) served as music teacher at Davis High School, including director of the orchestra, from 1948 until 1955. He played flute and participated in some of the first concerts of the UCD Music Department. In 1953 his book, The New Flute of the Eighteenth Century, was published. Honnold left DHS to join the faculty of American River College, which opened in 1955.  Forrest Honnold is the grandfather of professional rock climber, Alex Honnold.