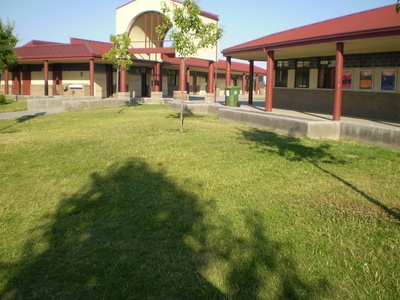 Students at Harper can participate in activities such as Day on the Green, Spirit Weeks, and many, many clubs. Some clubs include Builders Club, Anime Club, Soccer Fan Club, Jujitsu Club, Dreamworker's Club, Chess Club, Drama Club, and Guitar Club.

Harper is an outdoor campus. Each student has their own locker, which is pictured below.

In 2006, Harper Junior High had several incidents of harassment based on real or perceived sexual orientation (Harper Harassment Controversy). 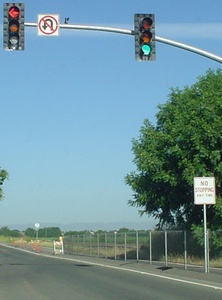 Ambiguous signage on Covell at the entrance to Harper Jr. High

2009-09-09 12:52:13   There has been a lot of controversy about the influence of Obama's speech on America's school children. As a concerned citizen, I have recently become troubled by the increased presence of Chrisitan incfluences in American public schools and at Harper Junior High. It appears that several people belonging to Protestant Christian organizations have taken up positions of authority in administration and teaching at Harper Junior High School. Likewise, there are people specifically linked to youth groups in these same organizations that are volunteering in all the Davis schools. These volunteers wrap themselves in a shroud of "community improvement," and say that they are "doing their part" to make Davis a better place. Sadly, what I call it is proselyting: "Hey Billy. Do you know that guy?" "Yeah, he's a leader of my youth group at church. You should come check it out." Citizens of Davis: Beware. Why do you think conservatives were so repulsed by the Obama speech? Because they are all too familiar with their own indoctrination techniques. —Citizendavis

2009-09-10 10:49:30   Jessica, your rant actually proves my point. Listen, Davis is a small town. A lot smaller than Santa Rosa. Like me, parents are highly educated in this town, and they don't take too kindly to any notion that their kids might be influenced by people who believe in superstitious voodoo religions like Christianity. Because Davis parents are smarter than Santa Rosa parents, they know how to aggitate and irritate local school administrators and school board members to get what they want. They're so smart that they know how to get rid of volunteers who are all about "being whoever they want." It's a small town. Learn to pick your battles, and learn when to stick your neck out; it will help you last longer here. PS I find it funny that you try to support your argument by intimating that the PRESIDENT is a churchgoing man. According to your kind, he's a pot smokin', illegal immigrant lovin', un-American, communist Muslim whose only religion is terrorism. —Citizendavis

2009-09-10 19:26:29   JesBisgano, WOW—what street cred. "All my friends are Democrats." Probably Democrats that love Ron Paul because he's so far to the right that he's actually to the left. Hey, after all the partying and "figuring yourself out" is over in Davis, it will be great for you to find a nice suburb away from here where you can settle down with all the other people that are like you. That way you can insulate yourself from all the people that you think cause all the problems in the world: all the minorities and the poor people; you know, all the people you think leech off society. That way you can go to bed at night safe with the thought that your children won't have to be confronted with ideas other than the ones that you will have already prepackaged for them. Or, maybe you could escape up to the mountains and take all your smarts and ingenuity with you so that the world can suffer in decay because all the really smart people like you (and your parents) are sick of the leeches sucking off you. That would be great (If you haven't gotten to Atlas Shrugged yet, don't worry. You will. Along with the Bible, it's required reading for conservative college types like yourself—it helps justify your already twisted belief system).

Listen BUDDY: because you have made things hurtful with your personal attacks by calling me the animal that Jesus rode on into Whereveralahem, I will try to do what your Jesus did in the first part of "The Necronomicon" when he said: "Do not resist an evil person. If someone strikes you on the right cheek, turn to him the other also." JesBisgano I will turn the other cheek and fade into the night like Batman. I will take the high road (I saw that you tried to take the high road, but I can see your devilish hoof marks on the road a few roads lower than the one I'm on, and my road is at the top, so you can't possibly be up here), and I will await injustice in the darkness. I offer up myself as a sacrifice (like Jesus did for all you sinners. I'm not a sinner cause I don't believe a word of any of that creepy, superstitious hocus pocus stuff) so that all the haters can be mad at me while I deliver justice and security to my community. Know this Davis, I will stand as a tireless sentry in my devotion to you——————-for—————it is—————— that I am————CITIZENDAVIS.

2010-02-08 16:02:39   I see that, like a turtle, JesBisgano took my advice and tucked her head inside her shell. What a shame, for I dearly loved her naivete. I only wish she would have left her comments for all to see instead of erasing them. Luckily, for anyone who is interested (Junior High kids are interested in this kind of stuff along with Hannah Montana, Spongebob, and American Idol) you can create an account and look at the "info" tab above where you can see the comments she added and subsequently erased. You see Jes, if you had consulted with real (and this is underlined: REAL) concerned Davis citizens, like Evan 'Jabberwokky' Evans or jsbmeb, they would have told you that you cannot completely erase and rewrite history as you and your fellow Republicans are wont to do.

As for you schoolboy, go eat your boogers and pop your zits somewhere else. You had better realize that you can't mess with someone who has gotten beyond puberty and knows how to make really good grilled cheese sandwiches.

Next stop for citizendavis is to go on Sarah Palin watch. She said she admits that she has some catching up to do when it comes to understanding the world and politics. She says she's been getting emails from experts updating her about important issues. And why is that? Because she's too dang stupid to learn about the issues herself. Ah well, it's always easier to let other people like Rush Limbaugh tell you what is important—that way you can have time to not think for yourself, shoot machine guns and count your ammunition, complain about how bad our great country is, and blame everyone else for your problems. —Citizendavis