Freeborn Hall, formerly known as Memorial Union Assembly Hall, was UC Davis' primary large event venue until the construction of the Mondavi Center. It was named for Stanley B. Freeborn. Construction of the 1,800 seat building was completed in 1961. There are often conferences as well as the occasional speaker or concert.

There is a tunnel connecting the Hall to Lower Freeborn.

Freeborn has seen such prominent performers as Nine Inch Nails, The Grateful Dead, and former President Bill Clinton made a brief visit after his appearance at the Mondavi Center.

On December 10, 2018 it was reported in the California Aggie that instead of being renovated, Freeborn Hall is to be demolished within 2 years.

Freeborn Hall has been closed since the Summer of 2014 due to seismic issues. Construction is projected to begin Fall 2018 and is projected to be completed in early 2020. While Freeborn Hall is closed, classes that were previously held in the Hall have been relocated to the MAC (room 138) in the ARC. After the remodeling of Freeborn it is projected to be a conference center that can hold 500 people with tables and upwards of 1,000 people as a concert or speaker engagement. 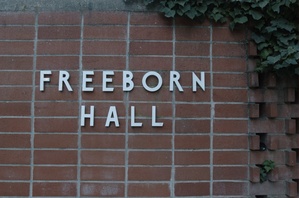 The owl outside the main entrance

Freeborn Hall was just four years old in this 1963 Orientation Week photo in the Davis Enterprise.